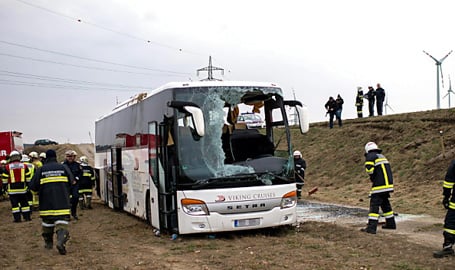 Lower Austrian police said he was in no condition to talk to them at present but they suspect he may have suddenly fallen ill whilst at the wheel and lost control of the vehicle.

A police spokesman told the Austria Press Agency that the musicians were on their way back to the Czech Republic after performing a series of concerts in Vienna when the accident happened.

The coach fell seven metres over a dike near the village of Mistelbach and landed on its side, fire rescue spokesman Franz Resperger said.

Most of the musicians escaped with minor injuries, and three suffered serious injuries.

One of the musicians was flown to Vienna General Hospital by emergency medical helicopter, and is now said to be in a stable condition. All players but two have been released from hospital and are on their way home.

Most of the orchestra flew out of Vienna on Sunday, direct to their next concert location in Poland, but those on the bus were not needed for that engagement.