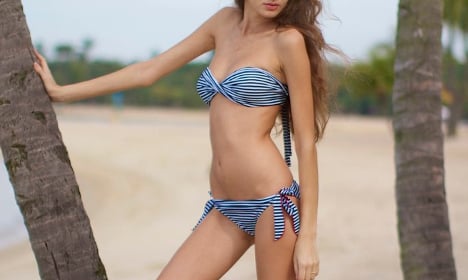 Skinny models will keep their jobs in France. At least for now. Photo: Christ T/Flickr
Socialist MP and neurologist Olivier Véran had pushed for ban on skinny models by proposing an amendment to Health Minister Marisol Touraine's recent reform package, which has already proved controversial and has seen doctors protesting across Paris.
Touraine herself backed the proposal that would stop model agencies being able to employ models whose Body Mass Index (BMI) falls below a certain level.
"I believe that models should eat well and look after their health. This is an important message to young women who see these models as an aesthetic example," she told French television.
Véran also proposed a new law that punish the "glorification of anorexia", especially online.
However, both of the doctor's amendments were rejected this week by a parliamentary commission with lawmakers claiming that banning skinny models would lead to discrimination in the hiring process. (Photo: Farrukh/Flickr)
Véran had suggested that model agencies should be forced to provide a medical certificate for each model, proving that her BMI is above a healthy level or face punishment of up to six months in prison and a €75,000 ($80,000) fine.
However the doctor has vowed to take the fight on to the next stage.
"But we're not giving up!" Véran told French newspaper Le Parisien after the decision, adding that he plans to propose the law again when the reforms are discussed in parliament.
The MP doctor aims for France to catch up with other countries like Spain, Italy, Belgium, Chile and Israel which have already passed laws against glorifying anorexia.
Véran said that up to 40,000 people in France are suffering from anorexia, around 90 percent of whom are adolescents.
If France is to ban skinny models, it must also tackle stiff opposition from The National Union of Modelling Agencies (SYNAM), which complained that a law change would affect the competitiveness of French modelling.
"French modelling agencies are in permanent competition with their European counterparts. As a result, a European approach is needed," the union said in a statement.