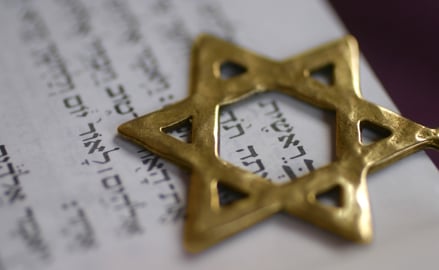 The Jewish symbol, the Star of David. Photo: Shutterstock

The incident happened on Tuesday at a supermarket in St. Polten, when the Jewish man was taunted by a group of young men.

He said that he ignored their anti-Semitic insults, but was then attacked by one of the men. "He insulted me and then started kicking me,” the 52-year-old told the Kurier.

Police intervened and arrested the 21-year-old attacker. According to the report, the victim required medical treatment after the beating.

During questioning, the alleged perpetrator admitted to kicking and hitting the man but denied that the attack was motivated by anti-Semitism, and said that he had also been injured and had been forced to defend himself. “I didn’t raise a hand against him,” he told police.

The alleged victim told the Heute newspaper that St. Polten is “one of the worst areas in terms of anti-Semitism in Lower Austria,” and said that he was considering moving elsewhere.

Last year, the number of anti-Semitic attacks recorded in Austria almost doubled, from 137 the previous year to 255.

“This is a development that worries us," Raymond Fastenbauer, Secretary General for Jewish Affairs, told the Kurier.