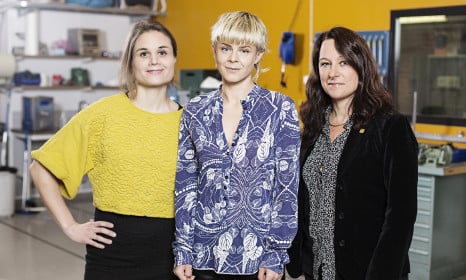 Robyn (centre) and the other Tekla organizers. Photo: KTH
While Sweden has a global reputation for gender equality, the nation's technology industry remains dominated by men. Less than one in five workers in IT and computing are women and only one in four Swedish engineers are female.
The new festival, Tekla, has been set up to encourage more teenage girls to consider future jobs in technological fields. Taking place at the KTH Royal Institute of Technology in Stockholm on Saturday April 18th, it is being organized by Swedish pop star turned entrepreneur Robyn, whose real name is Robin Carlsson.
It will include seminars for 11 to 18-year-olds on topics including robot programming, game design, digital visualization, music production and 3D printing.
One Sweden's most successful international recording artists thanks to tracks such as 'With Every Heartbeat' and 'Dancing on my Own', Carlsson is also a long time campaigner for gender equality in her home country and has pioneered using new technology in her work.
Her song 'Fembot' includes the line: "Once you gone tech you ain’t never going back".
In 2013 she was awarded KTH's annual Great Prize, which recognizes Swedish citizens who help their country to progress through science or art.
"I thought of KTH's motto 'science and art' and wanted to do something to inspire girls who are curious about technology," she said in a statement released on Tuesday.
Other speakers at the event include fellow Swedish singer Zhala who is signed to Robyn's record label Konichiwa and Swedish DJ Lap See, who will also perform for the students.
Sophia Hober, the dean at KTH hopes that the Tekla festival will also help to broaden and modernize young people's perceptions of art.
"We will highlight female role models in technology and give more girls the opportunity to find out what they want and how they can make use of technology. In the long term, we hope that Tekla may increase the recruitment of women to technical education," she said.
Currently about one in three new students at KTH are women.
"We hope that more girls will find that technology is fun, and see how they can use it in a creative way. The technology itself is not the goal – it is a means to solve problems," added Hober.
Other partners of the festival include Spotify and Google.