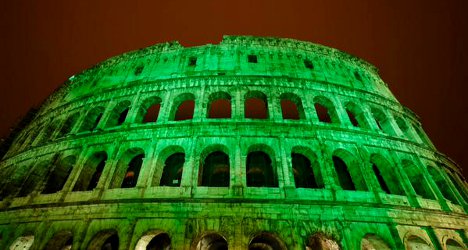 One of the Eternal City’s most famous ancient sites was bathed in green ahead of celebrations on March 17th, Ireland’s national holiday which has become a global event.

Lighting up the Colosseum was part of a collaborative effort between the Irish embassy in Rome, city hall and the culture ministry (MiBACT).

Ahead of the illumination Charlie Flanagan, Ireland’s foreign minister, said he was “delighted” the Colosseum would take on an Irish tint.

Niall Gibbons, CEO of Tourism Ireland, said the decision to include “one of the most famous monuments in the world” marked “a major coup for Irish tourism.”

Dozens of major landmarks worldwide have been lit up this year to mark St Patrick’s Day, including Italy’s Leaning Tower of Pisa.

The London Eye, the Sacré-Cœur Basilica in Paris, and New York’s Empire State Building are all included in the illuminations.