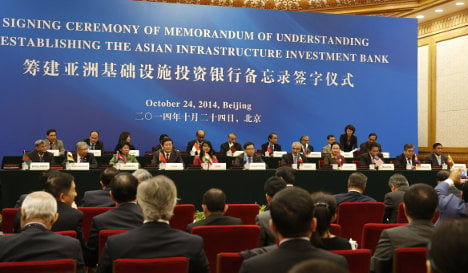 In a statement, the ministry said that Italy, France and Germany would becoming prospective founding members of the $50 billion institution, seen as a rival to the World Bank.

The announcement followed a report in the Financial Times late on Monday.

“The AIIB, as a new investment bank working in partnership with existing multilateral investment/development banks, could play an important role to provide funds for addressing the large infrastructure needs in Asia,” the statement said.

“The AIIB will thus promote economic and social development in the region and contribute to global growth.”

Shrugging off concerns from the US, the statement added that the three European countries were keen “to work with the AIIB founding members to establish an institution that follows the best standards and practices in terms of governance, safeguards, debt and procurement policies.”

The decision by the three EU states came a week after Britain announced it would join the bank, which was launched last year by Chinese President Xi Jinping. The bank is seen as being part of China’s plans to widen its international influence.

The UK's Finance Minister George Osborne said the move would give British firms the best opportunities to invest and work in the world’s fastest growing markets as parts of the country’s long-term economic plan.

But London's decision drew a cautious response from Washington, in a rare note of discord in their "special relationship", and followed criticism from the US about Britain's cuts to defence spending.

The FT said the move by Italy, France and Germany was a major diplomatic setback for the Obama administration, which argues that western countries would have more influence as non-members and could push for higher lending standards.

The US also has concerns about the bank’s standards of governance as well as environmental and social safeguards.

There are also worries that the institution, which aims to attract investment in infrastructure in areas such as transport, energy and telecommunications throughout Asia, would contribute to the spread of China’s “soft power” in the region, at the expense of the US.

The FT reported that Australia is also now rethinking its position.

Martin Schulz, the president of the EU parliament, was quoted by Reuters as saying that he welcomed the four European nations joining the AIIB, but stressed that the bank must conform to internationally accepted standards.

China and 20 other countries signed a memorandum of understanding to establish the Beijing-headquartered bank in October.

The bank has support from countries including India, Singapore, Malaysia, Cambodia, Pakistan, the Philippines, Uzbekistan and Vietnam.

The zones would only allow access to vehicles without combustion engines, such as electric cars.

Wednesday’s government proposal states that there is already demand at municipalities for zero-emissions zones in set parts of cities in order to reduce air and noise pollution.

The government said it wants to accommodate that demand while still enabling people to live, move around and shop in the zones.

“The government will therefore look closely at whether affected residents and businesses in the area have realistic alternatives and that there would be time to meet the criteria,” the government writes in the proposal.

“A framework must also be set to ensure access for necessary use of industrial vehicles, including delivery of goods,” it adds.

A long period of transition would be required in municipalities that decide to take up the option of establishing the zones, according to interest groups for the automotive industry.

Goods vehicles could be amongst those to face the largest obstacles in such a situation, as the range on zero emissions goods vehicles on the market is limited, according to the Confederation of Danish Industry (DI).

“That means it would be difficult to ensure supply to cities where the requirement for zero emissions might be effective,” DI’s CEO Lars Sandahl Sørensen said via written comment.

The association for car importers in Denmark, De Danske Bilimportører, said that the zones would be difficult to implement without a long phasing-in.

“The proposal for zero emissions zones in particular is very far reaching and can hardly be implemented without a long phasing in period, as the range of electric and hydrogen cars with sufficient range should be greater,” the organization’s CEO Mads Rørvig said in a statement.

FDM, an association for motorists in Denmark, went further in its criticism of the plan.

“It’s far too early and disproportionate to have zero-emissions zones that would exclude 98 percent of Danish motorists,” FDM senior consultant Dennis Lange said in a written comment.

“This is a symbolic policy which will have no measurable effect on pollution,” he added.