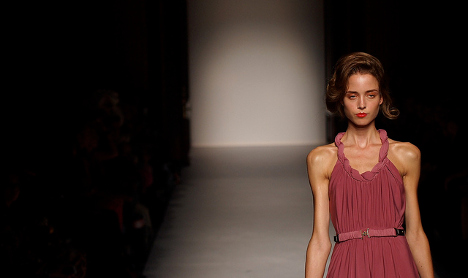 Photo: Farrukh/Flickr
How skinny is too skinny for a model?
Socialist MP Olivier Véran, who is also neurologist at the University Hospital of Grenoble, wants France to come up with a definite answer.
He is pushing for a new amendment to Health Minister Marisol Touraine's recent reforms, which have already proved controversial and prompted doctors to go on strike and protest on the streets of Paris on Sunday.
Véran will propose his idea be added to the health bill on Monday. He is calling for a ban on models with low Body Mass Indexes (BMI) and for a crackdown on anyone deemed to be "glorifying anorexia".
"It's intolerable to promote malnutrition and to commercially exploit people who are endangering their own health," Véran told newspaper Le Parisien.
He proposed that models would need medical certificates showing their BMI, and that employers hiring models with a too-low BMI will risk fines of €75,000 and up to six months in prison. The exact "acceptable" BMI for models is yet to be determined.
Véran will also push  for a crackdown on the glorification of anorexia, especially online. He proposed a ban on websites encouraging young girls to lose weight, pointing out that some were telling girls as young as 12 that it was "beautiful" to have a gap of 15 centimetres between their thighs.
Other websites he is targeting, which are also popular in the US, offer tips to young women and girls for how to survive on as little food as possible and how to lose weight.
Véran said that up to 40,000 people in France are suffering from anorexia, around 90 percent of whom are adolescents.