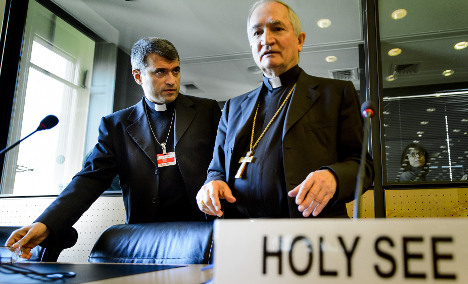 Vatican's Ambassador to the UN Silvano Tomasi (R) at a UN hearing in Geneva on May 5th, 2014. Photo: AFP

In an interview with the US Catholic website Crux, Archbishop Silvano Tomasi said Isis fighters were committing atrocities on a huge scale and the world needed to intervene.

"We have to stop this kind of genocide," the Italian archbishop told Crux.

"Otherwise we'll be crying out in the future about why we didn't do something, why we allowed such a terrible tragedy to happen."

Tomasi said a coordinated and "well-thought-out coalition" was needed to do everything possible to achieve a political settlement without violence.

"But if that's not possible, then the use of force will be necessary," he added.

Pope Francis has denounced the "intolerable brutality" being inflicted on Christians and other minorities in Iraq and Syria by Isis group militants.

Last month, Isis kidnapped 220 Assyrians in the Tal Tamr area of Syria where the extremist Islamist group has seized control of ten Christian villages, according to the Syrian Observatory for Human Rights.

And the pope expressed his dismay after the group's Libyan branch released a video showing the gruesome beheading of 21 mostly Egyptian Coptic Christians.