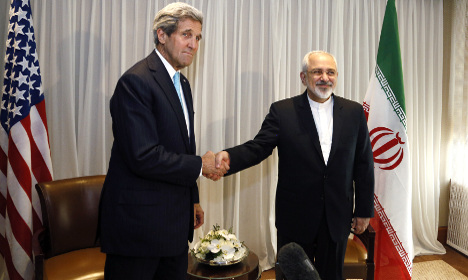 Iran and the US raced against the clock Sunday to close in on a nuclear deal with US Secretary of State John Kerry saying it was "time to get it done" after 18 months of intense negotiations.

"If (Iran's nuclear programme is) peaceful, let's get it done. And my hope is that in the next days, that will be possible," said Kerry, who is due to join the critical round of talks in the Swiss city of Lausanne later Sunday.

Washington wants Iran to dramatically scale down its nuclear programme in order to extend to at least a year the "breakout" time that Iran would in theory need to produce a bomb's worth of fissile material.

The Islamic republic, reeling from the pressure of sanctions, denies wanting nuclear weapons, saying its atomic programme is for purely peaceful purposes. It wants to expand its activities.

The target is for Iran and six world powers — the US, Russia, China, Britain, France and Germany — to agree the outlines of a deal by March 31st and to fine-tune the details by July 1st.

Added time pressure comes from the fact that Iran marks its new year on March 21st, after which the country effectively closes down for 10 days. US Republicans are also teeing up legislation that could kill the whole process.

"We believe very much that there's not anything that's going to change in April or May or June that suggests that at that time a decision you can't make now will be made then," Kerry told CBS television from Egypt Saturday.

The nuclear standoff has lasted more than a decade, but the 2013 election of President Hassan Rouhani resulted in a minor thaw and the past 18 months have seen an unprecedented diplomatic effort.

Under a landmark November 2013 interim deal, Tehran stopped expanding its activities in return for minor sanctions relief. Since then the parties have been pushing for a lasting accord.

But to the alarm of Israel, US Republicans and Washington's Gulf allies, the US looks to have abandoned insisting that Iran dismantles all nuclear activities, tolerating instead a small programme under tight controls and potentially shipping abroad Iran's nuclear material.

In theory, this still leaves Iran with the possibility, however small, to get the bomb, critics say, and last week 47 Republicans took the explosive step of writing an open letter to Iran's leaders.

They warned that any nuclear deal could be modified by Congress or revoked "with the stroke of a pen" by whomever succeeds President Barack Obama, a Democrat.

This followed a barnstorming address to US lawmakers on a Republican invitation by Israeli Prime Minister Benjamin Netanyahu — who faces a battle to be re-elected Tuesday — when he warned against a deal.

The letter provoked a storm in Washington with Obama saying he was "embarrassed" for the signatories, while Washington's allies in its talks with Iran were also unimpressed.

And Iranian Foreign Minister Mohammad Javad Zarif, who arrived in Lausanne on Sunday, joining US negotiators, said it "told us that we cannot trust the United States."

The letter "sends a message to the international community that Washington cannot be trusted to follow through on its commitments," Kelsey Davenport, an analyst at the Arms Control Association, told AFP.

Some progress has been made towards a deal but the two sides remain far apart on several key issues.

These include the future size of Iran's uranium enrichment capacities — which can make nuclear fuel but also the core of a bomb — the pace at which sanctions would be lifted and the accord's duration.

"We need clarity on the way in which sanctions will be lifted and what the guarantees will be for applying the deal," Zarif told state television Sunday from Lausanne.

Zarif is due in Brussels on Monday to meet his British, German, French and EU counterparts but will return to Lausanne. Senior negotiator Abbas Araqchi said political directors from all six powers will be present from Tuesday.

Two deadlines, in July and November, passed without an agreement but in view of the controversy in Washington — and pressure in Iran on Rouhani to deliver — extending yet again will be very tough.

"Absent a tangible achievement by the end of this month, the process could succumb to outside pressures," International Crisis Group analyst Ali Vaez told AFP. 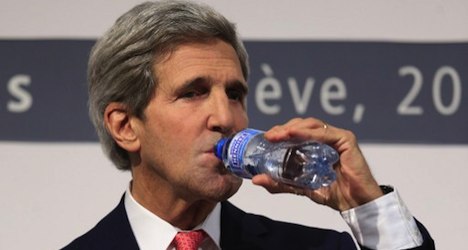