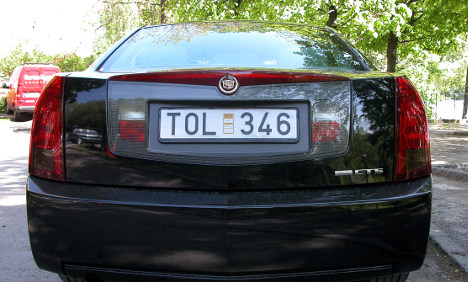 Best make sure your car is in good standing. Photo: TT

The new equipment will automatically identify vehicles not in legal standing by quickly scanning all license plates in the area, reported Sweden's national broadcaster SVT on Sunday.

If the car has a driving ban, is wanted by police for any variety of reasons, or, most commonly, its mandatory annual inspection has not been made or failed, a 'ping' appears on the device's screen.

According to Lovén, many people today fail to put their car through the annual vehicle inspection, because they do not always receive an automatic reminder as they did in the past, when state-owned vehicle inspection company Bilprovningen had the monopoly in Sweden.

Since July 2010, the inspection can be performed by any vehicle inspection body accredited by SWEDAC, Sweden's national accreditation body.

"It's very common today that 'Svensson' is driving around without having had his car inspected," said Lovén. "The most common response I get when I stop drivers is that they have not received any notice."

The new screening instrument allows for a quick scanning of a large amount of cars.

"We might for instance drive around in a parking lot at a major shopping center," explained Lovén. "We might identify five or six cars in bad standing, and then all we need to do is park at the exit and wait for them."

The camera, mentioned Lovén, captures license plate numbers that are clear and not obscured by dirt.

"A dirty white car with a dirty plate, for example, could make it hard for the camera to capture the plate number."

Driving with an obscured or dirty license plate, however, is also illegal.

"A dirty plate warrants a 1,500 kronor fine, so we can also stop and fine those vehicles."