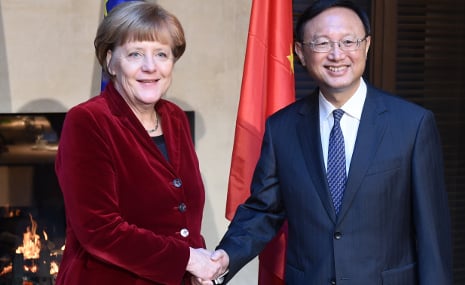 Merkel — who has visited China seven times in a decade — will meet Vice Premier Ma Kai as more than 600 Chinese companies exhibit their tech marvels at the CeBIT fair in the western city of Hanover.

Jack Ma, head of Alibaba — the online commerce giant that is China's answer to eBay and Amazon — will give the keynote address, and companies including Huawei, Xiaomi and Lenovo will fill over 3,000 square metres (30,000 square feet) of exhibition space.

"Now China has numerous companies that have become world leaders … for example Huawei, ZTE, Neusoft or Alibaba, some of which are far bigger than western IT companies.

"We see this as a shift on the world map: digitization is going east."

The almost three-decade old CeBIT once dazzled consumers with gadgets but has been overshadowed by big tech events in Las Vegas and Barcelona, leading it to focus on business users.

Last year IT professionals made up more than 90 percent of the over 200,000 visitors.

For Germany, the event aims to further cement economic ties with fellow export power China as both seek to adapt to the sweeping digitization of the world economy.

Germany calls it "Industry 4.0" — the fourth industrial revolution after steam power, factory mass production and the dawn of electronics and IT.

It refers to connecting automated manufacturing with the online world and the "Internet of Things", where everything from factories, homes and cars to household appliances will be online.

In October China's Premier Li Keqiang praised the "innovation partnership" with Germany and said his country must better harness the creative talents of its 1.3 billion people.

Germany is already by far the biggest European economic player in China, and its exports there have helped it offset the impact of the financial crisis in Europe. Two-way trade last year topped 140 billion euros ($177 billion).