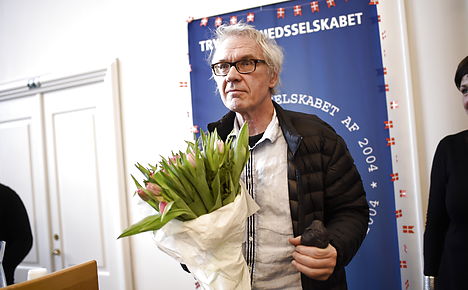 The award ceremony was Vilks' first public appearance since last month's shooting. Photo: David Leth Williams/Scanpix
Swedish cartoonist Lars Vilks was in Copenhagen on Saturday to complete an award ceremony that was interrupted by last month's terror attacks.
The 68-year-old cartoonist, who whipped up an outcry across the Muslim world with his 2007 sketch of the Prophet Muhammad as a dog, had lived in a secret location since the February 14 attempt on his life.
See also: Vilks: 'Of course I don't have a responsibility"
Omar El-Hussein, a Dane of Palestinian origin, fired a series of shots at a Copenhagen cultural centre that was hosting a debate on free speech attended by the cartoonist, killing 55-year-old filmmaker Finn Nørgaard.
The gunman later shot dead 37-year-old Jewish man Dan Uzan outside a synagogue before being killed by police.
See also: Danes form peace ring at Copenhagen synagogue
On Saturday, Vilks emerged in public to receive a prize awarded by the Danish Free Press Society (Trykkefrihedsselskabet). The prize handover was supposed to have been part of the February 14th debate at the Krudttønden cultural centre.
Saturday's ceremony was held under tight police surveillance at Christianborg.
When receiving the award, Vilks described himself not as an activist for freedom of speech but as a symbol.
"They say of me: he fights for freedom of expression, he does not give in. But the reality is the opposite: I am the most passive of them all," he said, according to Ritzau.
"I have now inherited this role of being the symbol of the freedom of expression," he added.
The right-leaning association itself is controversial, with some accusing it of Islamophobia.
It had previously also conferred a similar award to Kurt Westergaard – the cartoonist who drew the most infamous of the Jyllands-Posten Muhammad caricatures – as well as to former Jyllands-Posten culture editor Flemming Rose, who published the caricatures that sparked demonstrations across the Muslim world.
See also: The seller of 'Sweden's most dangerous art' speaks out
The Danish Free Press Society is currently selling Vilks' cartoon of Muhammad as a dog and an offshoot of the group is also selling works by another controversial Swedish artist, Dan Park. The Malmö-based Park had nine posters banned by the Swedish state after he was found guilty on charges of inciting racial agitation and defamation.
After much controversy and even death threats, Park's forbidden works were displayed in Copenhagen – first in Christiansborg and later in an Østerbro locale.
The Danish Free Press Society was founded in 2004 by outspoken Islam critic Lars Hedegaard, who himself survived a 2013 assassination attempt.
Url copied to clipboard!