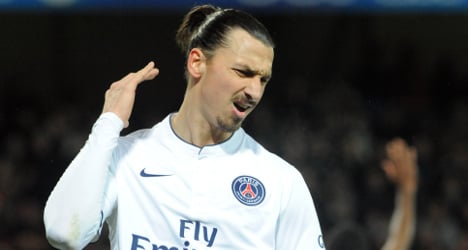 Ibrahimovic called France a "s**t country" then took back his words. Photo: AFP

Paris Saint-Germain suffered a Champions League hangover on Sunday as sloppy defending cost them a 3-2 defeat at the hands of Bordeaux and also dented the defence of their Ligue 1 crown.

PSG, who gave the French capital a boost with their dramatic Champions League last-16 victory over Chelsea on Wednesday, came back down to earth with a thud following a disjointed display at the Chaban-Delmas stadium in the south-west.

Zlatan Ibrahimovic had equalised twice for Laurent Blanc's side, who remain in the hunt for four trophies, but Diego Rolan popped up in the 89th minute to steer the ball home when the central defence collapsed.

Sweden's Ibrahimovic took exception to some of the decisions made by referee Lionel Jaffredo and cut a furious figure at the final whistle when he stormed down the tunnel.

"In 15 years, I have never seen such a referee. In this shit country, this country does not deserve PSG." the striker blasted in English at the final whistle.

"PSG shouldn't be in this country. We are too good for this country," the giant striker added.

In an extended clip shown on Canal+ television channel, the Swede is also seen accosting the referee, whom he calls an "idiot".

PSG coach Laurent Blanc tried to play down the incident in a post-match press conference, suggesting Ibrahimovic was just "annoyed".

"Don't you get annoyed too?" he asked journalists. "But when you are annoyed there's not normally a microphone there."

Politicians were soon sounding off about Ibrahimovic's words with the minister of sport demanding an apology and the National Front leader Marine Le Pen inviting the Sweden striker to leave the country.

"Those who consider France a shit country can leave it," she said.

Jerome Guedj, a leading Socialist party politician, called the remarks "unacceptable". "Let him play football and shut up, or at least be respectful of this country, the football supporters who were also insulted."

It wasn't long before the big Swede was offering his excuses for the rant.

In a statement released later on Sunday Ibrahimovic apologised saying: "My words were not targeting France or the French people. I was speaking about football and nothing else.

"I was speaking when I was annoyed and everyone knows that at these moments you can speak without thinking," he said.

The French league will study the Swedish player's latest outburst at a meeting on Thursday and could take sanctions.

The French referees union, SAFE, hit out at what it called "a new torrent of hate and verbal violence" by Ibrahimovic.
"There are limits that cannot be and must not be crossed," the union said, highlighting the "growing violence" at football matches even at local level.

Zlatan Ibrahimovic celebrates after scoring a goal in September. Photo: Miguel Medina/AFP
Milan confirmed in a statement that the Swedish striker had “tested negative” twice in a row, as stipulated in the protocol to be able to lift the quarantine procedure.
Ibrahimovic, 39, sounded a more triumphal note on his social media: “You are cured! The health authority says the quarantine is over, you can go out!”, he wrote on Twitter.

The announcement comes a day after Milan said Ibrahimovic had tested positive a second time for Covid-19, putting in doubt his participation in the Milan derby on October 17.
Ibrahimovic first tested positive on September 24.
The derby remains in doubt with two other Milan players and five from Inter currently in self-quarantine.
In spite of his absence, Milan have made a decent start to the season, having climbed to second in Serie A after winning all three of their games and reaching the group stages of the Europa League.
SHOW COMMENTS
Url copied to clipboard!