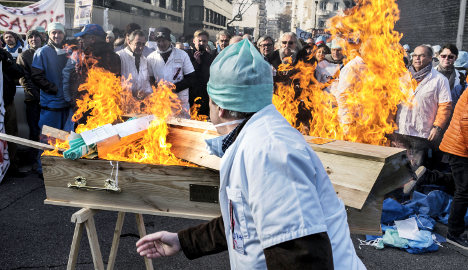 Doctors take to the streets of Lyon in january to protest health reforms. Photo: Jeff Pachoud/AFP

For doctors in France the issue is clear.

The reputation of the country's health care system as the best in the world is at stake.

In recent weeks France has seen doctors in hospital emergency wards go on strike over working conditions and a police memo warned that hospitals are at breaking point due to a shortage of beds and poor working conditions for staff, all exacerbated by a winter flu epidemic.

Health professionals have long demanded reforms but the minister of health’s bill, set to be discussed in parliament next week, has only served to provoke more anger among family doctors (GPs), who claim the quality of care they can offer will be severely undermined.

The reform prompted doctors to closed their cabinets over Christmas as part of nationwide industrial action and they vowed to create a bureaucratic mess for the government.

Their main of bone of contention is health minister Marisol Touraine’s plan to bring an end to a system, known as “tiers payant”, which sees patients in France pay upfront to see a doctor, 'A battle to save the French model'

The money handed over by patients, normally €23 for a consultation is then refunded mostly by the state's social security system and the rest by private insurance companies known as “mutuelles”.

The reform, which was an election promise of President François Hollande’s and demanded by the public will instead see doctors bill the state and private insurance companies for patients' visits.

Dr Eric Henry who will lead Sunday’s march to the Ministry of Health in Paris told The Local that France’s health service will no longer be the envy of the world if the reforms pass.

“This is a battle to save the French model. When we look at other countries we are always proud to be French because we know at the end of the day we will receive good health care here,” said Henry.

“This is the country where everyone around the world would like to receive treatment.”

The doctor leads the organisation Movement for Health for All which was created in February to bring health professionals together under one umbrella group under the slogan: “No to the health reform, united for the future of health care”.

'Doctors know their profession will be ruined'

“On Sunday we will see many doctors aged in their 50s and 60s, who are close to retirement, take to the streets in protest. They know that if it continues like this their profession will be ruined.”

Doctors say scrapping the system of paying upfront will see them lose their independence and will end up with them being “dictated to” by insurance companies who they will have to apply to for all reimbursements – basically their salaries.

Not only will it mean doctors having to spend hours filling in paperwork, but they will end up with less time with their patients and less independence to give the public the care they need.

“Having the patient pay upfront is the key to the system,” says Henry. “In France the quality of care is good because doctors are independent. 'What is the best for my patient?'

“I will no longer be free to ask the question 'what is the best thing for the patient’s health?' I will no be longer be independent.”

Henry also fears that without patients having to pay upfront they are more likely to visit the doctor “for any old reason”, which will mean he will have less consultation time with each patient.

The Movement for Health for All is hoping as many as 40,000 doctors take to the streets on Sunday to put pressure on the government, which so far has turned a deaf ear to their concerns.

“The Health Minister is not listening and that’s why we are protesting on Sunday. And we’ll continue to protest. If she pulls her plan then we’ll stop our protests, but if she doesn’t listen then we’ll continue. At the moment we are not sure what we will have to do to make sure she drops the reform.”