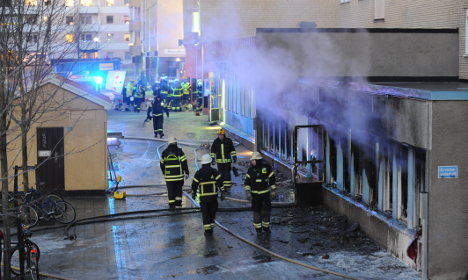 Five people were taken to hospital after the fire at a mosque in Eskilstuna. Photo: Pontus Stenberg/TT

How the mosque blaze in Eskilstuna, some 90 kilometres west of Stockholm, started is still unclear, but police have ruled out that the fire was suspicious.

"There is nothing that indicates that anybody from outside the mosque wanted to cause any harm," Fredrik Wallén, a regional police spokesman, said in a statement on Friday.

Around 70 people were in the mosque when the fire took hold on Christmas Day and many of them fled through windows to escape.

Anti-racism rallies attracted thousands of people in the days following the fire which took place around the same time as two similar incidents at Swedish mosques in Eslöv and Uppsala.

Wallén dismissed initial reports which suggested that the fire started after someone threw a burning object into the building, leading to much speculation that the alleged attack was an anti-Islamic hate crime.

"Information that someone or some people would have thrown something into the mosque can be dismissed. There is nothing in our investigation that confirms that that is about anything other than completely unfounded rumours among spectators at the scene," said Wallén.

Forensic teams said on Friday that the fire started in a pile of clothes in a room next to the prayer room, used as a coat room. Visitors to the mosque, including children, are believed to have been in the room at the time.

"We don't know why the fire started, but it could have by accident or by children playing with fire," Wallén said.

Rumours emerging last week that the blaze was started by an overheated deep fryer have been completely dismissed and were never part of the investigation, according to Swedish police and fire services.

David Hultman, who has been leading the fire service's investigation, told The Local earlier this week: "As far as I understand, this 'information' about the fire did not come from police in Eskilstuna who have been working on this case. I am not really sure who came up with this."