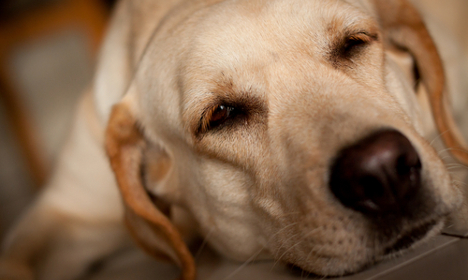 The dog stayed by his owner's body throughout the night. Dog photo: Shutterstock

Enzo Gaddi, 52, was found dead in a pit in his garden in the Modena area, Tgcom24 reported.

He went out on Tuesday night with his blind dog, who fell into the hole dug for a new mast for energy company Enel.

Gaddi’s body was found the next morning by his elderly mother, while the dog had stayed by his side throughout the night. The man’s precise cause of death has not yet been announced.

Italy is a dog-loving nation, which around six million registered pooches for a population of 60 million.

Last year tragedy struck along the country’s Adriatic coast, when a hero dog died moments after saving a boy from the sea. The dog raced into the water to save a five-year-old boy, but drowned moments after the child was rescued.

Photo by pichet wong from Pexels

The man, who was in his sixties, had been married more than once and also had children, national broadcaster NRK reports.

His name has been kept anonymous. According to neighbours he liked to keep to himself and when they didn’t see him, they thought he had moved or been taken to assisted living.

“Based on the details we have, it is obviously a person who has chosen to have little contact with others,” Grethe Lien Metild, chief of Oslo Police District, told NRK.

His body was discovered when a caretaker for the building he was living in requested police open the apartment so he could carry out his work.

“We have thought it about a lot, my colleagues and people who have worked with this for many years. This is a special case, and it makes us ask questions about how it could happen,” Metild said.

Police believe the man died in April 2011, based on a carton of milk and a letter that were found in his apartment. An autopsy has shown he died of natural causes.

READ ALSO: Immigrants in Norway more likely to be affected by loneliness

His pension was suspended in 2018 when the Norwegian Labour and Welfare Administration (NAV) could not get in touch with him, but his bills were still paid out of his bank account and suspended pension fund.

Arne Krokan, a professor at the Norwegian University of Science and Technology, said the man’s death would have unlikely gone unnoticed for so long if he had died 30 years ago.

“In a way, it is the price we have paid to get digital services,” he said to NRK.

Last year 27 people were found in Oslo, Asker or Bærum seven days or more after dying. The year before the number was 32 people. Of these, one was dead for almost seven months before being discovered.