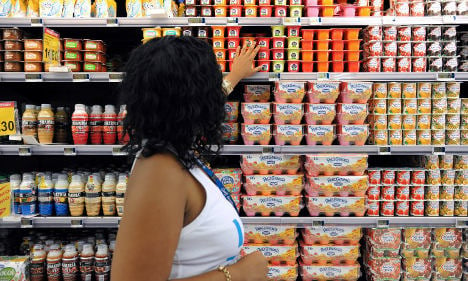 The ever-enormous yoghurt aisle in a French supermarket. Photo: AFP
The fines imposed on the "highly organised cartel" — among them Senagral, Novandis, and Lactalis — is one of the highest since the inception of the competition authority, its vice-president Thierry Dahan told a news conference.
The cartel operated between 2006 and 2012 and was accused of agreeing to set wholesale prices for various fresh dairy products in a bid to divvy up the market among themselves.
The Lactalis Nestle group which received the largest portion of the fine — €56.1 million euros — said it will appeal the "extremely severe" decision.
The Yoplait group managed to escape being sanctioned under a clemency procedure, since it had been the first to report the cartel's activities.
France is a big consumer of fresh dairy products with supermarket shelves stocked to the brim with a range of yoghurts, fresh cheese known as fromage blanc, and milk-based deserts.