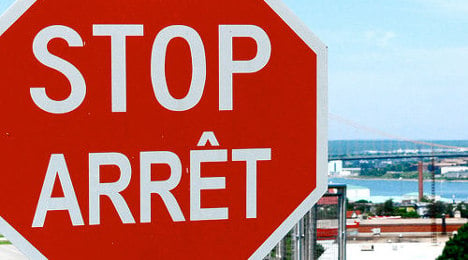 Is the French resistance to English coming to an end? Photo: FDComite/Flickr

Are the French about to end their famous resistance to the invasion of English words into the language of Molière?

France’s Minister of Culture, Fleur Pellerin, who is a fluent English-speaker, suggested a dramatic change in attitude from the government towards the endless incursion of English words into French.

Pellerin, who dubbed herself “the minister of the French language”, told The Local on Wednesday that France must realize “the world it is in” and that its language is “enriched by outside influences”.

“We need a dynamic approach towards the language. Of course I want to defend the French language but not to the point of preventing any influence from outside,” she said. “We need to be able to understand the world we are in and that our language is enriched by external influences. French has always been a language that has been enriched by words from other languages,” she said.

Pellerin was speaking on the same day she appeared at an event for the annual French Language and Francophonie Week, which starts this weekend.

“French is not in danger and my responsibility as minister is not to erect ineffective barriers against languages but to give all our citizens the means to make it live on,” she told the audience.

In the past the “immortals” at the Académie Française, sometimes dubbed France's language police, have often been ridiculed both in France and abroad for their fierce resistance towards English.

Their struggle has often been seen as in vain, given that the younger generation and businesspeople sprinkle their language with English words.

'I am not a fanatic'

And the culture ministry's attempts to ward off the encroachment of English by creating new French words has also been laughed off, notably its bid to replace “email” by the word “courriel” and more recently “hashtag” by the word “mot-dièse”.

Korean-born Pellerin, who is also fluent in German, believes it is important to create “possibilities” in French but she also said she’s not a “fanatic” like the folks at the Académie Française.

“English has always fascinated me because it’s easy to create new words or join two words and make a new word,” Pellerin told The Local after a meeting of the Anglo-American Press Association in Paris, adding that her favourite word was “serendipity” which she says has officially been added to the French language.

“I want French to be a living language. Today we have around 250 million French speakers and in 30 years there will be around 700 million speakers of French, mainly in central and northern Africa.” Nevertheless she points out that some English words creeping into French do cause a problem for French speakers, notably any words referring to the digital economy like “e-commerce”.

The main problem being that the French pronounce “e” more like “ugh”.

“A word like e-commerce has no sense in French from a linguistic point of view, it’s a pronunciation imported from abroad and a linguist told me it’s hard to explain it to young people, why it is pronounced differently to how is written,” said Pellerin.

French linguists cheered the shift in position, saying it did away with pedantry in favour of a more open approach.

Alain Rey, author of a dictionary on the history of French and a member of a Commission on French Terminology, said attempts to stop the adoption of some commonly used words were ridiculous.

He pointed out that the word “challenge”, for instance, in fact originally came from Old French (“chalonge”) before being taken up in English.

“Passing laws (against loan words) is to tilt at windmills,” Rey told AFP.

A language 'needs to live'

A Haitian-Canadian writer, Dany Laferriere, said at the culture minister's launch event that “a language needs to live first of all, otherwise it's all just ideology”.

Another linguist and author on the French language, Henriette Walter, said that “it is annoying” when foreign words are used to substitute perfectly good and common French words.

“But when one needs a new word for a new object, say a plant that comes from another country, one is rather pleased to have a word to refer to it,” she said.

The French and Francophonie Week celebrating the French language, spoken by 274 million people in different countries around the world, begins on Saturday.

Each year, France’s Larousse dictionary holds up a mirror to society, showing its evolution by making official the words and phrases that were most important in the year previous. This year, in preparation of its 2023 edition, the dictionary added 150 new words, which according to the publishing company, “testify to both the vitality and diversity of the French language.”

These are the words that have gotten people talking the most:

After over two years of Covid-19, it is not surprising that a number of coronavirus-related words have entered the dictionary. “Covid long” refers to the condition of lingering Covid-19 symptoms, sometimes for weeks or months after infection. Other Covid-19 related words and phrases that are now included in the Larousse are: passe vaccinal (vaccine pass), passe sanitaire (sanitary pass), vaccinateur or vaccinatrice (vaccinator), vaccinodrome (vaccine center), and distanciel (at a distance).

The noun “wokisme,” which made headlines and sparked controversy this past year, is now defined by the Larousse as follows: “Woke-inspired ideology, centered on questions of equality, justice and the defense of minorities, sometimes perceived as an attack on republican universalism.”

Another word reflective of the political climate in France, “Séparatisme” has been added to the dictionary under the definition “the will of a minority, usually religious, to place its own laws above national legislation.” A lot of times, you will see this word in debates surrounding religion and immigration.

“Grossophobie” is defined as “a hostile, mocking and/or contemptuous, even discriminatory, attitude towards obese or overweight people.” In English, this word is “fatphobia.”

The rise of tech and all things crypto is not specific to the anglophone word. Now, the English acronym, NFT, has made its way into the French dictionary, defined in French as “Les jetons non fongibles” (Non-fungible tokens).

Finally, the Larousse dictionary added plenty of words with non-French origins, like “Halloumi” which is a type of cheese made from mixed goat and sheep’s milk that is originally from Cyprus.

The Larousse 2023 will also include other new words from different foreign languages, like konjac (a Japanese plant), kakapo (a New Zealand parrot), tomte (a Swedish elf) and yodel (a singing technique from the German-speaking Alps).

These are just a few of the 64,000 words that will be included in the 2023 version of the dictionary.