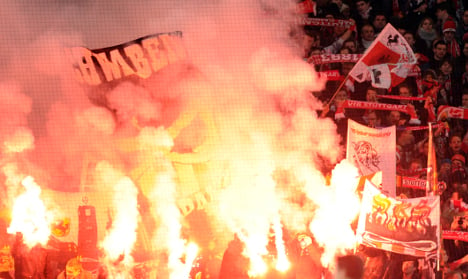 Last weekend a mob of VfB Stuttgart fans attacked police with stones after their match against Hertha BSC. Police reported that 12 officers were injured. This is just the latest in a long line of recent incidents.

Sky pundit Marcel Reif has become the target of hatred via social networks, and his car was recently attacked by a group of BVB and Schalke fans when arriving to cover a match.

Rainer Wendt, chairman of the German Police Union '(DPolG) said: "It's getting worse and worse. Sometimes it seems as if football will become the sport of fighting with the police.

"I get the feeling that action will only be taken when the first deaths occur."

The union is calling for extra measures that could aid police in their efforts, including nationwide life bans for repeat hooligans, which can currently only be handed out by individual clubs.

Another possible measure would be detaining violent hooligans on their way to the match, to stop troublemakers getting into the stadium.

Union chairman for Baden-Würtenmurg Joachim Lautensack painted a very worrying picture: "The lives of police officers in danger, violent attacks in broad daylight, and teams who have completely lost control. This is the intolerable situation we are facing."

A pattern is developing of violence being sparked online. People use anonymous to unload their hateful feelings, stir up tensions and start fights.

"Social networks offer people the opportunity to rage on a large scale and really let themselves go on their subjects," fan researcher Gunter A. Pilz told Die Welt.

In shocking scenes a few weeks ago, a group of Köln utras stormed the pitch at the final whistle of their local derby against Borussia Mönchengladbach dressed in white boiler suits.

The club is now facing serious punishment because of problems with hooligans over the last few years.

The problems are not limited to the top tier either, as the second league is experiencing similar issues.

Since its foundation six years ago, RB Leipzig has been targeted by fans of other clubs for threatening the traditions of German football with an over-commercialization of the game.

The name RB Leipzig is a deliberate marketing ploy because the club was founded by drinks company Red Bull.

Although the club has already suffered attacks including damage to their pitch, match boycotts, and fan protests, recently the hate campaign has escalated.

In the build up to the match between RB Leipzig and Karlsruhe, the Leipzig supporters' representative Enrico Hommel received a letter threatening violence should the fans support their team at the match.

A few hours before the match around 20 Karlsruhe fans stormed the dining room of the hotel where the Leipzig players were staying for the away fixture. Luckily the players were in their rooms and nobody was hurt.

There have certainly been a large number of incidents so far in 2015 in Germany, but is also important to place the problems in the wider context.

While British football seems to have largely consigned its hooliganism problems to the past of the 70s and 80s, the Premier League is more plagued by issues of racism at present.

Other European leagues are experiencing football related violence on a much bigger scale than in Germany.

In Spain, a 43 year-old man was killed last December during vicious fighting between fans of Deportivo La Coruna and Atlético Madrid.

In Greece the entire league has been suspended on three separate occasions because of the extreme extent of the violence and hooliganism. Other countries like Italy also have a terrible reputation for football related trouble.

Outside of Europe football stadiums have become the scenes of even worse tragedies. In February 22 people died as fans tried to force their way into a stadium in Cairo for an Egyptian league match. And 14 supporters had to be taken to hospital after fans of Equatorial Guinea hurled missiles at Ghana fans for nearly 40 minutes during the 2015 African Cup of Nations.

In the modern era, where the internet and particularly social media can so easily stir up hatred, the German football authorities must work extra hard to tackle these problems before they escalate into the kind of scenes witnessed in other parts of the world.