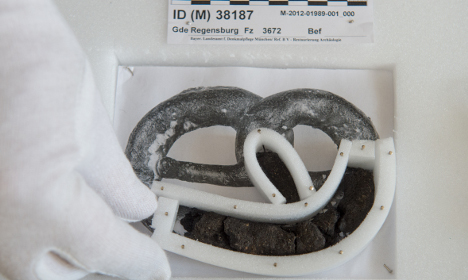 The 250 year-old pretzel being analyzed by experts. Photo: DPA

Silvia Codreanau-Windauer from the Bavarian Bureau for the Conservation of Historic Monuments confirmed that: "this is definitely the oldest pretzel ever found" – although she would give no word on whether it was past its expiration date.

Alongside the remains of the pretzel, archaeologists also found the charred remains of a bread roll and a croissant – suggesting that someone missed out on quite the historical breakfast buffet in the 18th century, the period the find has been dated to.

The baked goods are only preserved because they were burnt when originally made. Archaeologists suggest that the baker must have thrown them away in disappoinment.

The excavation site in the eastern Bavarian city of Regensburg has already proven a fruitful source for archaeologists, who discovered a wooden house thought to be up to 1200 years old there.

On this site, which lies on the Danube, there are plans to build a museum for Bavarian history to mark the centenary of the region's status as a free state in 2018.

The mayor of Regensburg Joachim Wolbergs said. "This discovery is really extraordinary, because it depicts a snippet of everyday life."

The baked delicacy is very much a part of everyday life. Pretzels may be seen as typically German by non-Germans, but really are very much a south German and Austrian delicacy.

It has been at the heart of southern German baking traditions for centuries, and in Bavaria in particular is often eaten for breakfast alongside Weißwürst (white sausage) with sweet mustard.

Codreanu-Windauer added some historical context to the discovery: "The form of the pretzel is supposed to represent the crossed arms of monks. Eventually it ended up as a fasting meal."

Monks are the symbol for the state capital Munich, and different orders and monasteries give their names to many of the Free State's most famous beers, from Augustiner to Weihenstephan – any of which are all the more delicious when enjoyed with a salty pretzel.