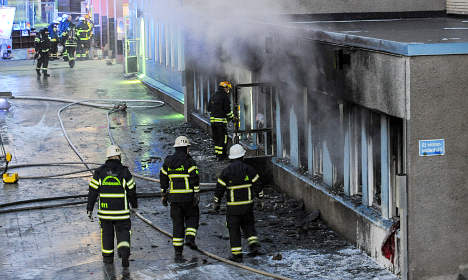 Five people were taken to hospital after the fire at a mosque in Eskilstuna. Photo: Pontus Stenberg/TT

The fire was the first of three conflagrations in the space of a week at mosques across Sweden.

Police initially believed the fire at the Dawa mosque in Eskilstuna was started deliberately and opened an arson investigation.

But a police source told local newspaper Eskilstuna-Kuriren on Monday that the fire had in fact been caused by an overheated deep fryer.

Police in the city would not confirm the report, and said the investigation was still ongoing.

Around 70 people were in the mosque when the fire took hold. Many of them fled through windows to escape the blaze.

The Swedish intelligence service, Säpo, was called in to aid with the investigation amid reports that an arsonist had thrown a burning object into the building.

Anti-racism rallies attracted thousands of people in the days following three fires at mosques in Eskilstuna, Eslöv and Uppsala.