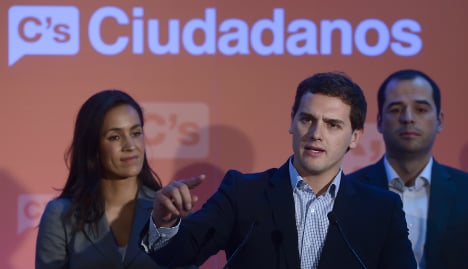 Is this just another radical protest party?

Ciudadanos isn’t just another protest party cashing in on the general malaise at traditional centrist parties with its radical ideas. In fact, Ciudadanos is bucking the trend for new extremists gatecrashing the political scene across Europe and is actually a centrist party occupying the middle ground.

This is no flash in the pan, risen up from nowhere party, either. It has been going since 2006 when Albert Rivera founded the party in his native Catalonia. But it triggered a huge surge of interest when it announced earlier this year that the party would launch nationwide.

Who is Albert Rivera?

This clean-cut 35 year-old lawyer burst onto the scene in 2006 when he stripped off to pose naked for a poster campaign to launch his new party across Catalonia. But he doesn’t need to rely on such gimmicks this time round. Like Podemos, Ciudadanos are a social media savvy party that has a huge presence on Twitter and can engage with a whole new generation of voters.

He was a swimming champion at the age of 16 and went on to study at ESADE business school in Barcelona before doing a masters at George Washington University in the USA.

Isn´t it just a Catalan party?

Rivera set up Ciutadans – as the party is known in Catalan or C's as they like to be called – to counter nationalism and in a region where separatist sentiments run high, Rivera was a breath of fresh air, advocating a multicultural identity.  His party won eight percent in Catalonia regional elections three years ago.

According to El País, Rivera always describes himself in a sentence that combines three languages: "Catalunya és la meva terra, España es mi país and EU our future. Mejor Unidos" – or, Catalonia is my land, Spain is my country and the EU our future. Better united.

Albert Rivera’s stance on the Catalan nationalist issue has won him a certain respect across the rest of Spain and now he is ready to reap the benefits.

What do they stand for?

Last month the party outlined their economic policies at an event in Madrid´s Circulo de Bellas Artes. Described by the Economist as “a programme of pragmatic workable economic ideas” they included labour reform to restrict the abuse of short-term contracts and tax credits to help the large number of Spanish workers who fail to earn the annual minimum salary € EUR9,080 ($10,300).

The party also promises to overhaul Spain's education system and introduce more skills-based subjects. And it vows to come down hard on corruption.

Andalusia’s regional elections take place on March 22nd and should be a good barometre of how C’s is doing on a national level. According to recent figures released by Spanish research body CIS, C’s will take 5 seats, making them Spain’s fourth biggest party after the ruling Popular Party (PP), the opposition Socialists (PSOE) and increasingly popular left-wing party, Podemos.

On a national level, a recent El País poll found that if an election was held tomorrow, 12.2 percent of votes would go to the C’s, making them the fourth most popular party nationally, too.

C’s also have the most charismatic leader according to a recent El País poll; Rivera had an approval rating of 49 percent while current Prime Minsiter Mariano Rajoy disapproval rating was a whopping 73 percent.  C’s have already have nine deputies in the Catalan parliament, as well as two MEPs.

Why are they popular?

Spaniards are desperate for something new, only 2.9 percent think the current political situation in Spain is 'good' or 'very good' according to a recent CIS poll. While Podemos are currently in the limelight, voting for them is a radical leap of faith for many Spaniards, who, while they might enjoy marching for change, might be less inclined to vote for such an extreme party. C’s occupies the centrist middle-ground and are older than Podemos, which has only just celebrated its first anniversary.

C’s was founded in 2006 and already has nine deputies in the Parliament of Catalonia. They are also firmly anti-nationalist, so people wary of the Catalan independence movement might also pledge C’s their vote.

Who is afraid of them?

If no party wins a majority, C’s could hold the balance of power, which should be making both the PP and the PSOE and even Podemos quake in their boots. Rivera has yet to hint at any allegiance, keeping his cards close to his chest where potential future allies are involved. Podemos could be nervous of C’s nipping at their heels, consistently coming fourth in the polls, they are a viable alternative for voters sick of the two-party system.

The ruling PP should also be afraid. Whereas the PP downplayed the threat of Podemos, believing they would only take votes from the PSOE, fracturing the left-wing voters, C’s threaten to steal away votes from the centre-right. C’s growing popularity among Spaniards marks the true end of the two party system in Spain.

How do they use social media?

One thing that differentiates Spain’s newer political parties, such as C’s and Podemos, from the more traditional parties, is their use of social media. On its website, C’s talks about ‘digital activism’ as a great way to transmit its ideas and values. And it seems to be working. C’s Twitter page has 128,000 followers while Albert Rivera has 221,000.

The party turned a joke by a PP politician into a social media masterclass recently, making the hashtag #YoSoyNaranjito (I am little orange) shoot to the second most trending topic worldwide.