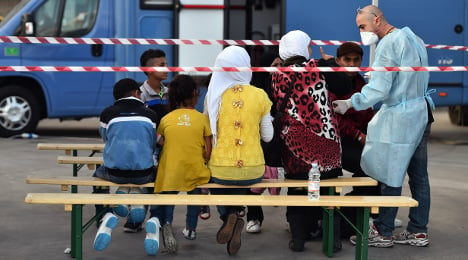 Migrants in Sicily after being brought to the Italian island by the coast guard. Photo: Gabriel Bouys/AFP

Italy's coastguard rescued 127 people and recovered ten bodies on Tuesday after a boat capsized off Sicily when the people on board rushed to one side of the vessel in a stampede to get onto the arriving coastguard boat.

Interviews with the survivors have since revealed that at least another 40 people went overboard prior to the arrival of the rescuers, IOM spokesman Flavio di Giacomo told AFP.

"We drew up a list of the relatives and friends of survivors who were on the boat and there are at least 40 unaccounted for," he said. "Some of them were children, although we cannot say exactly how many."

The group rescued on Tuesday included 27 children and 51 women.

Di Giacomo said the latest deaths took the migrant death toll in the waters between north Africa and southern Italy to more than 400 since the start of the year.

The high number has been linked to a surge in the numbers attempting the perilous crossing during the winter months.

The increasing confidence and resources of people smugglers and the worsening chaos in Libya have both been put forward as explanations for the acceleration in the flow of migrants trying to reach Europe by sea after making their way to north Africa overland from the Middle East, South Asia and sub-Saharan Africa.

Italy's foreign ministry said on Thursday that 8,918 migrants had been landed in Italy between January 1st and March 4th, a near 60-percent increase from the total of 5,611 registered in the same period in 2014.

A total of 170,000 migrants landed in Italy in the whole of 2014 and current trends suggest that record figure could be comfortably exceeded this year.