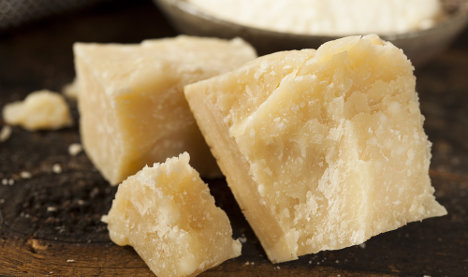 Parmesan makers have cried foul over the huge scale on which the famous Italian cheese is copied in the United States. Photo: Parmesan photo: Shutterstock

For the first time, the number of wheels of cheeses made outside Italy in the style of the celebrated Parmigiano Reggiano and the similar Grana Padano now exceeds production in their Italian home regions, the country's biggest agriculture group Coldiretti said.

Over 300,000 tonnes of what Italians consider to be "fake" versions of the famous cheeses were produced overseas – for the most part in the United States – compared to 295,000 tonnes produced in Italy, Coldiretti said as producers staged a demonstration over the issue in Bologna.

While the soft blue cheese Gorgonzola may be enjoying surging international sales, the hard cheeses have suffered a drop in exports, damaging a sector already struggling to recover from an earthquake which tore through the Emilia Romagna region in 2012.

Producers "find themselves facing a situation more serious than the earthquake which three years ago knocked over thousands of wheels and destroyed warehouses," Coldiretti said.

Exports of Parmesan to the United States dropped 10 percent last year, amid reports of an increase in popularity of a kit which claims users can make the cheese themselves at home in just two months.

Parmigiano Reggiano producers last year were forced to swallow a 20 percent drop in prices to €7.31 ($8.11) per kilo over the year, while prices for consumers dipped just 4.0 percent.

According to Coldiretti, one in four small producers of Parmesan have gone out of business since 2007.

Both Parmigiano Reggiano and Grana Padano are DOC certified – a controlled designation of origin status obtained by which they must be produced within regional boundaries and under strict quality controls.

The Parmigiano Reggiano brand is protected worldwide and can only be legally used for cheese produced in and around the northern city of Parma, in line with strict quality standards.

Similar restrictions apply to all cheese sold as parmesan within the European Union but the English name for the cheese can legally be used by North American producers for their own output.