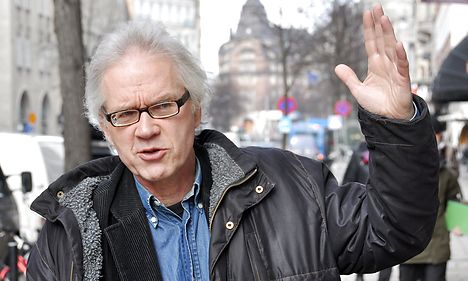 Lars Vilks is scheduled to make his first public appearance since the Copenhagen attacks on Friday and is due to return to the Danish capital on March 14th. Photo: FRANCOIS CAMPREDON/Scanpix
Lars Vilks was due to speak at a panel discussion on free speech in the Swedish city of Gothenburg on Friday, in what would have been the cartoonist's first public appearance since the February 14th shooting at a Copenhagen cafe where Vilks was participating in a conference on free speech. The event had already been postponed by a day following concerns about the security of teachers taking part in a union conference in the same building on Thursday and now organizers have decided to pull the plug.
Friday's talk ended up being cancelled late on Wednesday afternoon after it emerged it would clash with a lecture being hosted by an art school, which rents rooms in the same venue.
"It's very unfortunate. But we felt it would not work. Our tenants should not be hit with problems caused by this booking," the CEO of the Folkets hus (The People's House) venue, Lina Lindquist, said about the Vilks talk.
Earlier in the day, Vilks told The Local's team in Stockholm that he thought the event would go forward.
"I really hope that we will be able to take part in it but there seems to be a lot of administrative and security trouble around it, so we are still not sure," Vilks told The Local on Wednesday.
"What we are hoping it will be is a conference and a debate about freedom of speech and how the discussions around this have changed in these past two months in Europe where these questions are being so heavily discussed. We want to know what people have been saying and what are the arguments."
Lars Vilks – who has faced several death threats since his cartoon portraying the Prophet Mohammed as a dog was published in a Swedish newspaper in 2007 – has been in hiding after since the attacks in Copenhagen earlier this month which left two people dead.
A separate planned lecture by the artist at Sweden's Karlstad University on March 17th has already been scrapped by organizers, who said they could not guarantee the safety of the audience in the wake of the recent shootings in Denmark and France.
Vilks said on Wednesday that he was "doing well" and had held his first face-to-face meetings with contacts and journalists this week.
Asked if he was nervous about his safety if the scheduled debate on Friday does go ahead, he said: "Absolutely not. You could wake me up in the night and pick me up and plonk me in any public event and I would feel secure".
He said that his police protection officers were "very well trained" and said he was confident that strong security would be provided on Friday.
This week it emerged that the artist will return to Copenhagen on March 14th to pick up the award from the Danish Free Press Society (Trykkefrihedsselskabet) that he was scheduled to get on the night of the February 14th terror attacks. He will return to the Danish capital to collect the honour at a ceremony in Christiansborg.
Url copied to clipboard!