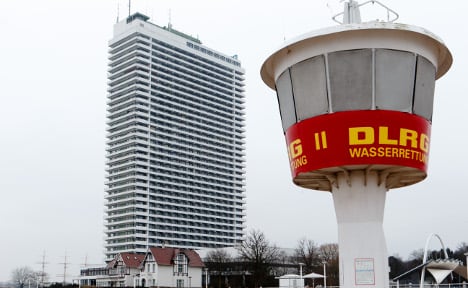 Trouble at the top. Photo: DPA

The Federal Supreme Court (BGH), for whom no case seems too small, ruled that the neighbours bothered by the sound of reverberating footsteps on uncarpeted floors had to well, just grin and bear it.

The BGH ruled in line with a lower court's findings that the footfalls of the man who lived upstairs were within reasonable noise levels, as they fell within the official maximum level of footfall noise of 63 decibels.

For comparison, 60 decibels would be equivalent to normal conversation.

The plaintiffs and their neighbour were all residents of the Maritim complex, a 30-störy building complex with hotel rooms and 320 apartments in Travemünde, a town on the Baltic Sea.

The retired couple's lawyer argued before the court that the new neighbour should have left the carpet where it was, as it belonged to the posh building's character.

“The upscale amenities were binding,” he said.

But the BGH argued that the “special characteristics of the building” as a fancy, upmarket complex, were not enough to justify a ruling favoring carpeted floors.

“In addition, changing tastes in terms of preferred flooring speak against (ensuring) a permanent character for the building,” the court said.

As such, the court did not see it fit to force a carpet which was probably “chic in the 70s” on the plaintiff's neighbour, BGH judge Christina Stresemann said.

The defendant's lawyer also pointed out the the building complex already had 53 apartments with tiled, parquet, and laminated flooring.

The BGH's ruling is bound to disappoint renters hoping to bring their rents down by complaining about loud steps overhead.

The average Spaniard leaves the nest at 29.5 years of age. Photo: Gabriel Bouys/AFP