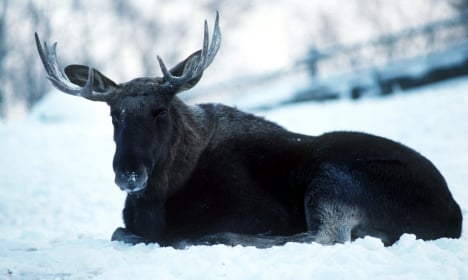 “Of course it's not nice to hit something. When it's elks and cows I've hit, the damages to the train can be tough to deal with, because you have to step outside and remove things. It could be things that have broken on the vehicle that you have to go out and fix,” train driver Erik Johansson told Swedish Radio.

Elk accidents on railways cost the Swedish state one to one-and-a-half billion kronor ($120.2-180.3 million) every year. And with the beasts weighing in at around 500 kilogrammes or more, the problem can cause delayed trains as well as damaged engines.

The Swedish Transportation Authority is currently investigating the possibility of building fences around the three worst affected rail lines, which are all in Örebro county in central Sweden.

“We're thinking of building a combination of fencing and a passage where a special technique identifies when an animal is approaching and will somehow warn the animal by scaring it away from the railway or preventing it from walking on to the rails when there's a train coming through,” Anders Sjölund, ecologist at the Transportation Authority, told Swedish Radio.

If given the green light, construction work could start in 2016.

“This will cost a number of millions, but on the other hand the cost of the accidents to society is huge and our ambition is to decrease animal accidents by 80 percent,” Sjölund added.

Sweden's total population of elk is estimated to be 300-400,000. While they are seen across the entire country, the largest populations are in Bergslagen and Dalarna in central Sweden.