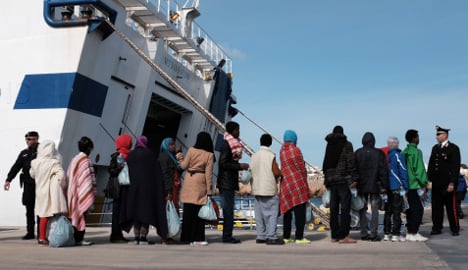 While recognizing Italy’s efforts to save boat migrants in the Mediterranean last year – over 170,000 arrived in the country last year – Amnesty said concerns remain over lives lost and the treatment of survivors.

“The government’s decision to stop a dedicated operation to save lives at sea, Mare Nostrum, at the end of October raised concerns that the death toll could increase significantly,” the human rights organization said in its annual report.

Mare Nostrum was replaced by the EU’s Triton operation, which patrols just a fraction of the area Italian authorities covered. As Amnesty feared, the death toll has increased, with more than 300 feared drowned in just a matter of days earlier this month.

The organization stated that there had been “no progress” in investigating a shipwreck in October 2013, in which over 200 people drowned. Not noted in the report were the numerous criminal cases against people traffickers, most recently the 30-year sentence against a Somali man who raped and attacked migrants.

As depleted rescue efforts go on in the Mediterranean, Amnesty criticized Italy for failing “to ensure adequate reception conditions for the high number of seaborne refugees and migrants”. Immigration centres across Italy are full, prompting the government to make use of empty buildings such as schools to house newcomers.

On arrival, migrants reported “excessive use of force” while being identified by Italian authorities, following a government decision to allow police to use force to collect fingerprints.

Many migrants avoid being identified in order to travel onwards and seek asylum in other European countries.

Amnesty also highlighted the plight of children, saying that unaccompanied minors did not receive adequate protection in Italy.

Beyond their immediate arrival, refugees and asylum-seekers in Italy “remained at risk of destitution” in 2014. Migrant workers, meanwhile, “continued to be exploited and remained vulnerable to abuse”, unable to access justice.

In its broader analysis of human rights in Italy, Amnesty pinpointed the continued “discrimination against Roma” as a cause for alarm.

“Thousands of Roma families continued to live in poor conditions in segregated camps and centres, including more than 4,000 in Rome alone,” the organization said.

Members of the community continued to face forced evictions across Italy last year, while the Roma community remained “excluded from accessing social housing”. This is a reflection of the government’s failure to implement its National Strategy for the Inclusion of Roma, Amnesty said.

The European Commission has also expressed its concerns, last year launching an inquiry into whether Italy has broken EU rules on race equality.

Rather than shut the Roma camps set up in Italy, the government in December cleared one in the Italian capital and moved residents out. Families were not offered adequate housing alternatives and continue to live in “inadequate conditions”, Amnesty said.

The human rights organization also touched upon other problems in Italy, such as “the lack of accountability for deaths in custody” and overcrowding in prisons. There has been some progress in these areas, although substantial shortfalls remain.