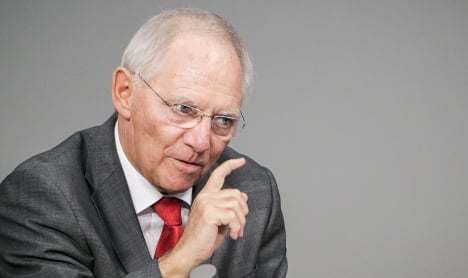 As the most experienced member of the German cabinet, Schäuble, 72, has served as Chancellor Angela Merkel's right-hand man throughout the lengthy battle to resolve the eurozone crisis.

But his uncompromising stance over a new debt deal with Greece's fledgling anti-austerity government could, if it comes to the much-feared "Grexit", eventually see him cast as the man who forced Greece out of the euro.

His insistence on often painful reforms in return for rescue loans had already earned him both admirers and enemies.

But his head-on collision with the new hard-left government in Athens under Prime Minister Alexis Tsipras and his Finance Minister Yanis Varoufakis has become openly hostile.

A joint news conference with his Greek counterpart in Berlin at the beginning of this month was icy.

And when a Greek newspaper caricature depicted Schäuble in a Nazi-era army uniform, his spokesman condemned the cartoon as "vile".

Since then, Schäuble has been clearly piqued by what he saw as a string of personal insults coming from Greece.

Tsipras even said the German finance minister had lost his cool with Varoufakis at a meeting in Brussels.

Schäuble insists he is fighting for smaller eurozone countries which have made great sacrifices and pushed through painful and unpopular economic reforms to remain in the single currency.

A top European official said the stand-off between Germany and Greece has come down to a clash of personalities between the plain-talking Schäuble and the casual and fast-talking Varoufakis.

"There is a real problem of personalities and I understand that Schäuble is outraged by comments made by Varoufakis," the official said.

The 72-year-old is one of Merkel's most trusted and loyal allies, and her most seasoned cabinet member. He has held five ministerial offices since 1994 and been a member of parliament for more than 40 years.

It was under former conservative leader Helmut Kohl that the pro-European Schäuble forged his career, rising through the ranks to eventually become Kohl's chief of staff and one-time heir apparent. He has been confined to a wheelchair since an assassination attempt by a deranged man in 1990, the same year he oversaw Germany's joyful national reunification.

Schäuble nearly sacrificed his career in a slush-fund scandal that shattered Kohl's reputation. But after a period in the political wilderness, he made a comeback in 2002.

While Merkel refused to back Schäuble two years later for the role of federal president — instead picking former head of the International Monetary Fund, Horst Koehler — he became interior minister the following year.

Schäuble did not have an easy time in the position and was criticised by civil liberties groups for curbing rights in response to the threat of extremist attacks.

However, Merkel rewarded him in October 2009 when she tapped him for the more high-profile finance ministry. At the time, Schäuble told reporters he was "stunned" by the appointment.

Schäuble was born in Freiburg in southwestern Germany in 1942 as the son of a conservative politician. He is bookish with a dry wit, married and has four children.

While he never officially said so, Schäuble was believed to have ambitions to become head of the Eurogroup of eurozone finance ministers in 2012, but eventually turned the job down in face of strong reservations in a number of European countries.

He has never been soft on other Europeans.

Describing himself as "pitiless" in his management of Germany's public purse, he shows the same exactitude towards his partners, campaigning for tight fiscal discipline and insisting on stringent conditions for any bailout contribution by Berlin.

His biographer Peter Schütz calls him the "most honest man" he knows, "even if he's not always the most charming."