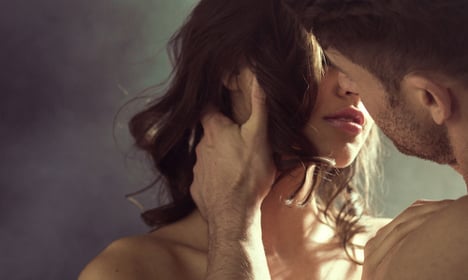 A French website promoting extra-marital affairs complained of censorship on Wednesday after complaints led to its ads being pulled from buses in several cities near Paris.

One bus company, Keolis, confirmed it was pulling the ads for Gleeden.com, particularly in the upmarket city of Versailles near the French capital, saying it had received more than 500 complaints in a single week — compared with 900 it normally receives in a year.

The advert features a half-eaten apple with the tagline "the premier site for extra-marital encounters designed by women." (Adverts for Gleeden have been pulled after complaints from a Catholic organisation. Photo: AFP)

The Paris-based Associations of Catholic Families group also filed a court complaint on Wednesday against the site's publisher, Black Divine, "challenging the legality of the site and its advertisements," their lawyer said.

"We don't understand the exaggerated reaction, especially since we have been advertising for five years," said Solene Paillet, a spokeswoman for the site.

"The campaign carried a very neutral message and was in no way shocking."

She called the decision "backward", pointing out that infidelity has not been an offence in France since 1975.

In the city of Rambouillet, conservative mayor Marc Robert led the charge against the adverts after being alerted by residents.

"I consider this advert a clear incitement to disrespect the civil code, which stipulates mutual respect, fidelity, help and assistance between spouses," he said in a letter to one bus company.