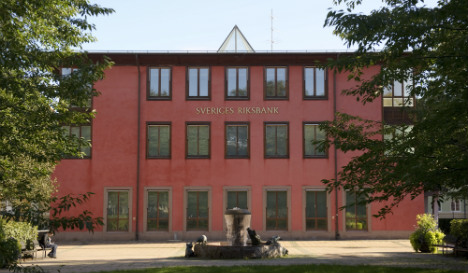 The Swedish central bank's historic cut of its base-interest rate to -0.1 percent on Thursday was accompanied by the first outright quantitative-easing programme adopted by a smaller economy.

Sweden's move comes as central banks across Europe are fighting to stop their economies from slipping into damaging deflationary cycles that could be difficult to reverse.

"What we've seen since the end of 2014 and the start of this year is a type of chicken race between central banks. Several of them have chosen to lower interest rates and expand their balance sheets," bank SEB's chief economist Robert Bergquist told AFP.

Sweden on Friday announced it would buy 10 billion kronor ($1.18 billion, €1.04 billion) of bonds with maturities between one and five years — a policy often considered a last-ditch attempt to revive a stagnating economy.

By contrast, Sweden intends to use the programme to take aim at a more specific threat: deflation.

Prices in Sweden have been stagnant since 2012 but have yet to start falling, which could trigger a dangerous cycle where consumers hold off purchases, demand drops forcing companies to cut jobs and stifling economic growth.

"Sweden's only reason is this fear that a weaker euro might result in high deflation pressure," said Danish Sydbank's analyst Peter Bojsen Jakobsen.

The Nordic country is far from the eight-year stagnation that led Japan to pioneer quantitative easing in 1998, yet Swedish central bank chief Stefan

Ingves said this week that more expansionary moves could lie ahead.

Some analysts have criticised the move. "It sends a crisis signal and the Swedish economy is not in crisis," Nordea bank's chief economist Annika Winsth told AFP.

"A free lunch will cost you in the long run," she added.

Economists are also worried how it could impact Sweden's household debt levels, which are among the highest in the world.

Bojsen Jakobsen questioned "whether it's necessary for Sweden to introduce an even larger programme in a situation where the credit growth is doing quite well, some might say too well, private consumption is growing, and everything is pointing toward decent growth".

At only 0.3 percent of gross domestic product (GDP), the Swedish purchase remains a peashooter to the European Central Bank's €1.14-trillion bazooka unveiled in January to boost the sluggish 19-nation eurozone economy.

But Sweden's programme can still have regional spillover effects.

Denmark's central bank — which has kept its deposit rate below zero for over six months and lowered it further last week — might see quantitative easing as a tempting tool to reach for now that its Swedish neighbour already has.

"If the currency peg remains under pressure I would guess (bond-buying) has got to be towards the top of the list of policy options for Denmark," said

On Thursday, the Danish krone shot up on the back of the Swedish announcement, an unwelcome effect in a country whose central bank in January spent six percent of GDP to keep the currency down.

"Sweden's example could cause Denmark to follow," Hoynes added.

In Norway, although inflation has not reached the 2.5 percent annual target since 2010 it is still far from flatlining at two percent. The central bank also has room to cut its interest rate, which sits at 1.25 percent after a downward nudge in December.

Yet the Norwegian krona dropped one percent on Thursday's news of Sweden's trip to the money presses. 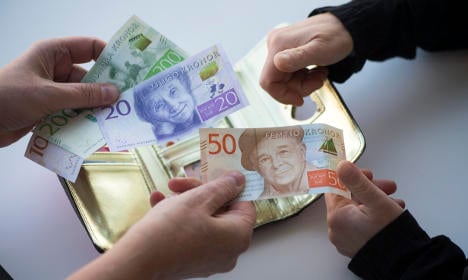 Swedish kronor. Photo: Fredrik Sandberg/TT
The Riksbank has also said it is expanding the country's bond-buying programme, with a further 65 billion kronor ($766 million) spent on the project.
The Nordic nation first slashed its interest rate – the repo – below zero in February in a landmark decision. It's national bank continued to cut rates in subsequent months, with the -0.35 rate introduced in July.
The Riksbank is hoping that its financial strategy will boost inflation in order to raise the price of everyday goods and services in Sweden which have been stagnant for two years. It has argued that this in turn will improve the country's economic prospects.
In a statement following Wednesday's announcement, the bank said that “economic activity is strengthening and inflation is showing a clear upward trend”.
The bank said that inflation was still on course to be close to two percent in 2016.
However it explained that it was keeping rates low due to “considerable uncertainty regarding the strength of the global economy”.
“Compared with previous forecasts, inflation abroad is deemed to be slightly lower and many central banks are expected to pursue an expansionary monetary policy for a longer time,” the text continued.
The basic idea behind negative rates is to stop organisations or people from making risky investments or transactions that could impact on the wider economy.
However Wednesday's decision to hold the repo at -0.35 is bad news for savers in Sweden who will continue to see no return on any nest eggs stashed in basic savings accounts.
But those wishing to borrow money to buy properties or shares will continue to benefit from the record low rates.
Sweden's bond buying programme is a version of quantitive easing, which in simple terms involves borrowing money to inject back into the economy.
The Riksbank said that the additional bond purchases announced on Wednesday would bring the total figure bought to 200 billion kronor by the end of 2016.
The krona was stable after the announcement but the Swedish market continued to fall, having previously experienced jitters following a forecast from the National Debt Office.
Url copied to clipboard!