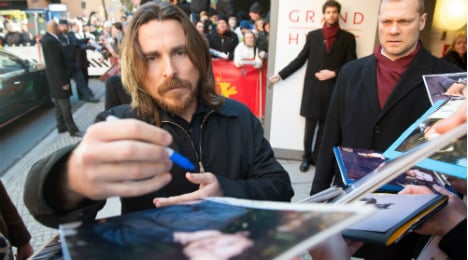 Christian Bale and Natalie Portman took to the red carpet to present their competition film "Knight of Cups", directed by Terrence Malick. The film also stars Cate Blanchett and Slumdog Millionaire's Frieda Pinto in the romantic comedy about a LA screenwriter facing a series of strange events.

Ian McKellen also debuted his new nose (for on-screen purposes only) as Sherlock Holmes, albeit a long-retired version of the character for his film "Mr. Holmes".

German stars were out in full force, but were mostly outshone by their international counterparts, including Nicole Kidman and James Franco, who presented the biopic "Queen of the Desert" for audiences and jury.

Others, like  Elizabeth Banks for "Love and Mercy", entertained press questions and a group of young European actors, including "Game of Thrones" heroine Maisie Williams, were honoured as European Shooting Stars.

The Berlin Film Festival is the most open in the world, with 30,000 tickets sold to the public each year

German director Andreas Dresen called it a festival for the people.

"In Cannes, there are no 'normal' people in the cinema," he said. "Cannes is an exclusive circle while Berlin is a folk fest of cinema."

SEE ALL OUR BERLINAE PHOTOS FROM  THE WEEKEND

SEE ALSO: Five spots for spotting a celebrity at Berlinale

This year’s Oscars marked the first time in its almost 100-year history that two female filmmakers – Chloé Zhao and Emerald Fennell – were nominated in the Best Director category. Only five women have ever been nominated for this award. Zhao took home the gong, becoming just the second woman ever to do so.

In 2021’s Berlinale Festival, 60 percent of the films in the Generation category were directed by women — with 75 percent of female filmmakers making up the Kplus selection (a category for younger audiences).

Here is a look at seven films by some of the most influential female directors in German cinema.

The film follows three female friends through post-unification Berlin, who are making their way to a wedding when their car breaks down. They wander through the streets of former East Berlin, roaming in and out of bars meeting men.

The dilapidated sites of the former Cold War frontier city, still scarred by World War II, become a place for sheer endless personal experimentation where the women begin to reconfigure their lives and loves.

Frankenberg’s impressionistic portrait of three women in the city reflects on the state of the newly unified Germany, where for a moment all possibilities seemed radically open. (Available on Mubi, Binged)

Considered one of the classics of the New German Cinema movement, The German Sisters tells an intimate story of Germany.

Based on the real-life story of the Enslein sisters, it is an expression of director Margarethe Von Trotta’s combination of the personal and the political. It’s the story of Juliane, a feminist journalist and her sister, Marianne, who is a terrorist revolutionary. The film, which won six awards at the Venice Film Festival including the Golden Lion, was Margarethe Von Trotta’s third film and first collaboration with Barbara Sukowa. The director-actor duo went on to do six more films together. (Available on Mubi, Prime) Toni Erdmann is a German-Austrian comedy which was directed, written and co-produced by Maren Ade. The film, which premiered in competition at the Cannes Film Festival, was named the best film of 2016.

Meant to showcase the intricacies of a father-daughter relationship, the film pairs carefully constructed, three-dimensional characters in a tenderly funny character study. A hard-working woman reluctantly agrees to spend time with her estranged father when he unexpectedly arrives.

As a practical joker, the father does his best to reconnect by pretending to be her CEO’s life coach. (Available on Mubi, Kanopy, Prime, Vudu)

I was at home, but (Ich war zuhause, aber) is a 2019 German drama film directed by Angela Schanelec. At the Berlinale that year, Schanelec won the Silver Bear for Best Director.

The film is a story about a 13-year-old student, Phillip, who disappears without a trace for a week and suddenly reappears.

It maps the existential crises his mother and teachers are confronted with that change their whole view of life. The film features several plots, which tell the stories of several people who are all connected to Phillip in some way. It has scenes with long silences, to contrast ones with heavy dialogue, which critics believe makes this film a cinematic masterpiece. (Available on Apple iTunes, Google Play Movies, Vudu, or rent on YouTube).

This film has been described as a symphonic study of human behaviour. It’s the story of a violin teacher, who takes great interest in mentoring a student for an audition. Anna, the violinist and teacher played by Nina Hoss, shows plenty of compassion toward the boy at first, but their relationship becomes much more strained as the date of Alexander’s audition nears and Anna begins to put him through musical torture. Come the day of the exam, events take a tragic turn. (Available on Amazon Prime Video)

It tells the story of a woman who trains police horses. She adopts her second child, a severely traumatised five-year-old girl. When the girl shows violent and anti-social behaviour, her new mother becomes determined to help her.

The film has been described as raising fascinating questions – how do you draw boundaries for a child who seems to ignore them or even takes a perverse pleasure in overstepping them? What can you do as a parent when you realize that your love and protection aren’t enough? (Available on Netflix, Hulu, Amazon Prime)

Another film about a rebellious child, System Crasher picked up a whopping eight German Film Awards after its release in 2019.

The film has a powerful political message about the inadequacies of the universal child care system. The protagonist, Benni, is a violent nine-year-old girl who suffers from psychotic episodes. Her key social worker, Frau Bafané, tries to get Benni into special schools or facilities; dozens turn her down and Benni is too young to be effectively sectioned as an inpatient.

In an interview with The Guardian, Fingscheidt says, “There’s a very German dimension to the film in the obsession with bureaucracy, with rules that need to be adhered to. Rules like, ‘this child cannot stay in this home because they are getting too emotionally attached,’ when that institution may be the first place where a child has begun to open up.”

The film has received an incredible amount of international recognition, garnering 45 international awards. (Available on Netflix)