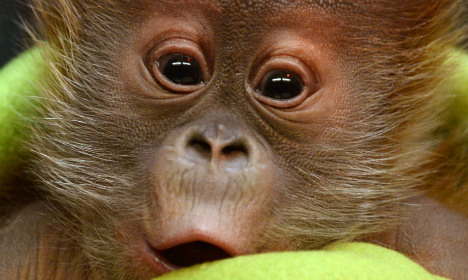 Rieke was born on January 12, 2015, and soon after, it became clear to Berlin zoo officials that the little one was not being accepted by her mother, the 11-year-old Djasinga.

And so Rieke from Berlin became the little orang-utan baby with three dads as three zookeepers took care of her, feeding her bottles and bringing her weight up from 400 grammes to 2,290 grammes.

On Friday, the Zoologischer Garten Berlin announced that Rieke would make her first public appearance at the weekend with visitors being able to catch a glimpse at the pint-sized ape on Saturday in the monkey kitchen, where keepers will feed and change her for the crowd.

There won't be much more time to see Rieke, as it was also announced on Friday that Rieke would soon be travelling to the Monkey World Ape Rescue Centre in Dorset, England. There, Rieke will have a friend in the five-month old Sumatra orang-utan, Bulu Mata.

"It will be very difficult to give Rieke up after all of our teamwork, but this is the best place for the little orang-utan girl," said Ruben Gralki, one of her zoo papas. "We are definitely going to miss her all the same."

An exact date for her move has yet to be determined, but as soon as the paperwork for Rieke's move to England is cleared, the logistics will be worked out.

Officials also said that it is most likely Rieke will be transported by car.

Meanwhile, another little zoo baby is drawing attention due to a very famous relative from the Berlin zoo: Knut has a little brother in Rostock.

Rostock zoo officials say the bear born at the zoo in December is the son of  Lars, who fathered Knut.

Knut was born in the Berlin Zoo in December 2006 and raised by keeper Thomas Dörflein after being rejected by his mother.

Knut's story and adorable pictures of playing with Dörflein made him a global celebrity and netted him a spot on the cover of Vanity Fair with Leonard DiCaprio.

Knut's life ended in 2011 after suffering from a seizure caused by encephalitis.

The Rostock baby polar bear is in need of a name, say keepers, who are appealing to the public for suggestions.