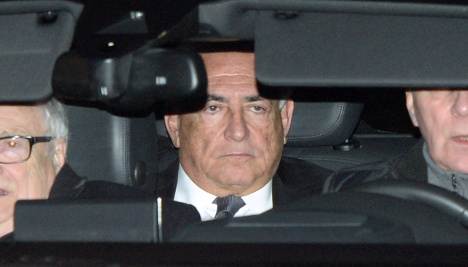 DSK is rushed away from the court in Lille after his appearance at the start of his trial. Photo: AFP

The businessman, David Roquet who is accused of setting up sex parties with prostitutes for former presidential hopeful Strauss-Kahn and others, was due to take the stand later on Friday.

In an interview with French TV station BFM, he said he quietly paid the women after the parties and that Strauss-Kahn was unaware they were prostitutes.

"The girls who accompanied us were elegant, cultivated. It's not like being parked up in a car in the pouring rain," he said.

He said he enjoyed spending "an afternoon with a man who was the second most-important person in the world and a future president of the republic".

"That was my goal, professionally. It was to organise a lunch with Mr Strauss-Kahn and heads of business," Roquet added.

A total of 14 people — including businessmen and police connected through freemasonry — are accused of "aggravated pimping" for their part in organising the prostitutes for the sex parties in luxury hotel rooms.

Under French court rules, defendants cannot talk about someone not present in the courtroom, so Friday's testimony will not directly relate to Strauss-Kahn, who does not appear until Tuesday.

Riglaire denounced the proceedings, saying it had put his family through hell.

"There is nothing but damaged people in this room," he said, holding back tears.

"I will never forgive those who have dragged us before this court and ensured the publicity of the case."