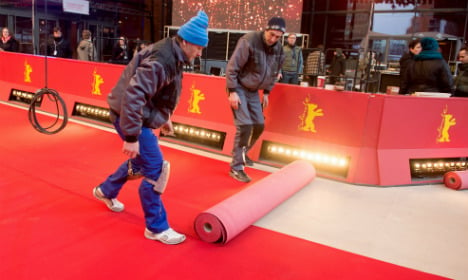 Set in the forbidding reaches of Greenland's frozen tundra, the film is based on the true story of Josephine Peary, the headstrong wife of Robert Peary, an American adventurer who led several drives to reach the North Pole.

The French actress plays Josephine, who embarks on a dangerous trek in 1908 to find Robert (Gabriel Byrne) with the help of young Inuit woman Allaka, who she learns is her husband's mistress.

Japan's Rinko Kikuchi, who was nominated for an Academy Award for her work in the 2006 drama "Babel", plays Allaka.

The picture was partly shot in a remote region of western Norway which previously stood in for the ice planet Hoth in "The Empire Strikes Back". Film stills show the two women swaddled in animal skins against the bone-piercing cold.

"Nobody Wants the Night" is one of 19 films vying for the festival's Golden Bear top prize, to be awarded at a gala ceremony on February 14 by jury president Darren Aronofsky, the US director of "Black Swan".

SEE ALSO: The complete main line up to the 65th Berlinale

It will be the seventh film Coixet has presented at the Berlinale, as the event is known, following features including "My Life Without Me" in 2003 and "Elegy", the 2008 adaptation of a Philip Roth novel starring Penelope Cruz and Ben Kingsley.

Coixet is only the second woman to hold the festival's coveted opening-night spot and one of three female directors in competition at the Berlinale, Europe's first major film festival of the year.

Aronofsky hailed the arthouse flavour of the Berlin cinema showcase, saying at a press conference that the "benefit of festivals is that they bring attention to films that have a hard time creating space in this world".

Among the other contenders at the 11-day event are German director Werner Herzog, who will unveil "Queen of the Desert" starring Nicole Kidman as British archaeologist and spy Gertrude Bell, opposite "Twilight" heartthrob Robert Pattinson as T.E. Lawrence.

Reclusive US filmmaker Terrence Malick will premiere the keenly-awaited "Knight of Cups" starring Christian Bale as a Hollywood screenwriter in a love triangle with two women (Cate Blanchett and Natalie Portman).

"Taxi", the third picture by dissident Iranian director Jafar Panahi since he was slapped with an official filmmaking ban in 2010, will also have its first screening in the German capital.

Panahi, who has also been barred from travelling abroad, will not be able to attend the premiere, his Paris-based sales company Celluloid Dreams told AFP.

US television director Andrew Haigh will join the race with the surreal drama "45 Years" starring Charlotte Rampling as a woman who sees her time-tested marriage start to unravel.

In a strong year for women-driven pictures, Lea Seydoux, the latest Bond girl in the British spy movie franchise, stars in French veteran Benoit Jacquot's adaptation of the groundbreaking 1900 novel "Diary of a Chambermaid".

Latin American cinema will be out in force with Chile submitting "The Club" by Pablo Larrain and the documentary "The Pearl Button" by Patricio Guzman.

Peter Greenaway will be showing his Mexican co-production "Eisenstein in Guanajuato", and Guatamala will send its first competition entry, "Ixcanul Volcano" by Jayro Bustamante.

This time Jiang Wen will fly the flag for China with his latest, the 1920s gangster comedy "Gone with the Bullets", while Japan's Sabu will present his other-worldly love story "Chasuke's Journey".

Journalist Anke Westphal, who has covered the festival for more than two decades, said she thought organisers had struck the right balance between the Berlinale's trademark hard-hitting political fare and top-notch releases by cinema heavyweights.

"The Berlinale tried in the past to boost its profile by discovering young, lesser-known directors – now it's back with major auteurs."