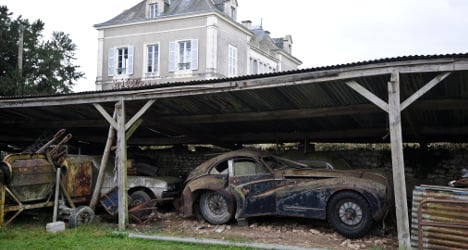 The antique car collection found on a farm in France will go under the hammer this week. Photos: Xavier Leoty/AFP

The cars, described as "sleeping beauties" by the Artcurial auction house, will be sold in the state they were found, some rusted and weather-beaten, having been kept in makeshift shelters exposed to the elements.

The 60 classic gems, bearing legendary names like Bugatti, Hispano-Suiza, Talbot-Lago, Panhard-Levassor, Maserati, Ferrari, Delahaye and Delage have been described by Artcurial as "works of art."

Among them is one of only 37 Ferrari 250 GT SWB California Spiders ever made, valued at up to 12 million euros, which was discovered under a pile of dusty old car magazines.

The once-in-a-lifetime discovery, announced in December, was likened by Artcurial managing director Matthieu Lamoure to stumbling upon the car world's equivalent of the tomb of Egyptian pharaoh Tutankhamun.

Lamoure and senior specialist Pierre Novikoff got a tip-off about the timeworn fleet while criss-crossing the country hunting for rare pieces.

On the farm — Artcurial is keeping the exact location secret — they found a hodge-podge of makeshift structures, describing shock after shock as they realised the treasures they contained.

"This was somewhere between a metallic graveyard and a museum," said Novikoff, describing valuable cars invaded by ivy, and in some cases corrugated iron resting directly on the cars.

"We were overcome with emotion. Probably much like Lord Carrington and Howard Carter, on being the first for centuries to enter Tutankhamun's tomb," said Lamoure.

The rare California Spider — a car which features 13 times on the list of the 100 most expensive cars ever sold — was bought new by French actor Gerard Blain and later sold to fellow actor Alain Delon.

Delon was photographed with American actresses Jane Fonda and Shirley MacLaine in the car, which historians thought was lost forever.

Also uncovered is an extravagant Talbot Lago T26 Cabriolet that belonged to Egypt's last monarch King Farouk, an immensely rich ruler known for grotesque extravagance, and avid collector who along with fast cars amassed one of the world's most famous coin collections.

"This is surely the last time that such a discovery will be made, anywhere in the world. What is so special here is the number of cars, the range and the quality and pedigree of the models," said Novikoff.

'It is a sculpture'

But how did such a jackpot of mythical automobiles end up on a rural French farm, left to rust for half a century?

While classic cars are now snapped up and extremely valuable, this was not the case a few decades ago when inventor and automobile enthusiast Roger Baillon became one of the first collectors.

He had a transport business in the west of France where he in 1947 designed and built his own car known as the Bluebird, all while raking in a fortune in the post WWII boom in the sector.

He bought the property in 1953 to turn into an automobile museum, snapping up classic cars — some saved from the scrapyard — and according to Lamoure, even bought a little train which he planned to use to give tours of his museum. "When the vehicles arrived he put them away without much fuss, one next to the other. He restored some and left others as they were," said Novikoff.

But when the 70s swung in, Baillon's business went into decline, and he held a large sale of his car collection at the end of the decade and to car historians, that was the end of that.

But it turned out he had clung on to many of the collection's jewels.

"This is a very rare opportunity presenting works of art unknown to the market! For the Talbot Lago T26 Grand Sport coupe Saoutchik, caved in at the rear, I think it should be left in this condition. It is a sculpture."