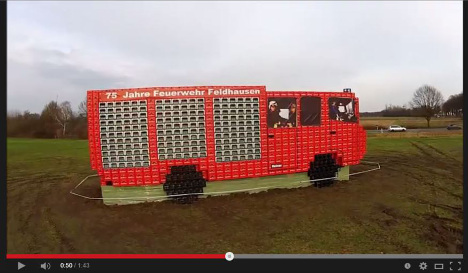 The men from the Feldhausen Volunteer Fire Service worked throughout the day on Saturday to put together their mammoth project using cherry picker cranes and good old-fashioned elbow grease, the Dorstener Zeitung reported.

People flocked to a field in the small town in North Rhine-Westphalia to watch the firefighters at work.

But by 7 pm the team were behind schedule and had to put in an extra shift in the dark.

"The individual parts were done quickly, but it took longer than we thought to put them all together with the crane," organizer Florian Spickermann told the newspaper.

By 10:30 pm the whole structure was finished, with Spickermann saying the firefighters were "pleased and happy, but totally worn out."

Participants filmed the whole thing from three different angles to document the record attempt and ensure there was no cheating.

It will be 12 weeks until the Guinness Book of Records compilers make their decision on whether the firefighters were successful.

Their artwork will stand in place until the fire department's jubilee party on the 10th and 11th of July.