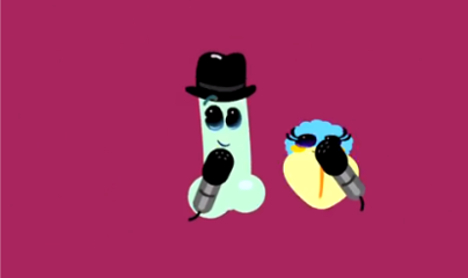 Photo: SVT
The video shows a cartoon penis and vagina dancing around to a song designed to introduce children aged between three and six years to the differences between boys and girls and help them understand the human body.
It was made for children's programme Bacillakuten, which was shown on Sunday by public television network SVT, with a preview clip going viral ahead of the broadcast.
After attracting some strong criticism on Facebook, as The Local reported on Friday, YouTube classified the video as "adult rated", stating it "may be inappropriate for some users" and asking viewers to confirm they were over eighteen before clicking on the song.
But SVT later persuaded YouTube to agree that the clip was not explicit or aimed at adults, leading the video giant to lift the adult classification.
Some of the video's lyrics translate as: "Here comes the penis at full pace", and: "the vagina is cool, you better believe it, even on an old lady. It just sits there so elegantly".
By Monday afternoon the video had been viewed almost 975,000 times on YouTube.
The clip has attracted global attention since The Local broke the story about it in English, with American site Daily Dot writing: "Do you know why the Swedes are better than us? Because they can have dancing penises and vaginas in children's programs."
Cosmopolitan magazine's online site wrote: "This Swedish children's cartoon features dancing genitals because the Swedes are more open with gender and sexuality talk with young kids. Also, they love hilarious stuff. Because I'm telling you, if my niece and nephew saw a cartoon of a penis donning a chapeau to dance the tango with a vagina in curly blue wig, they would lose their collective shit."
Kajsa Peters, project manager for Bacillakuten, wrote on SVT's website last week that the purpose of the song was educational.
"Bacillakuten's purpose is to teach children about the body and its functions. We hope that the song will help in this learning. The song is part of playful learning, which we believe is the best way to reach kids."