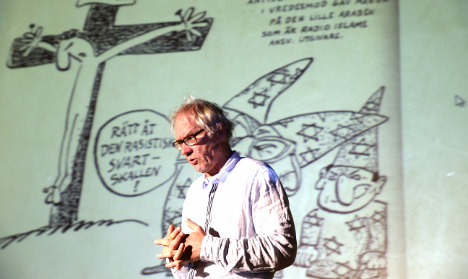 Swedish cartoonist Lars Vilks. Photo: TT
Swedish artist Lars Vilks received death threats after his satirical cartoons were published in regional newspaper Nerikes Allehanda in 2007.
He was later featured on Al Qaeda's Most Wanted List in 2013, alongside the Editor of Charlie Hebdo, the magazine that was attacked in Paris on Wednesday morning, leaving twelve people dead.
Speaking after the attack, he said that he had been "shaken" by what he had heard, but argued that Swedish and other European media should not shy away from printing controversial cartoons in the future.
Writing on Swedish broadcaster SVT’s website, he argued that if the publication of Mohammad pictures had been more widespread in the past, this would have made it harder for extremists to act.
“We have a situation today in which satirical pictures with motifs related to Islam are already censored in most media," he said.
“This is now likely to get even worse. The reason we’ve landed in this particularly unhealthy situation is that the media have consciously chosen (partly out of tact, partly our of fear) to exercise self-censorship and not to spread the risks.”
"I want the media and politicians to change strategy in terms of freedom of speech, we must never succumb to threats and violence," he wrote.
Speaking to regional newspaper Helsingborg Dagbladet, he said he would not let the shootings affect his plans for the coming year, which include giving lectures at the University of Linköping in southern Sweden.
The artist already enlists the help of security guards.
"You cannot give up freedom of expression. The attack in Paris tells us something about the times we are living in today," he told the newspaper.

PARTNER CONTENT
Would your career benefit from an EMBA?