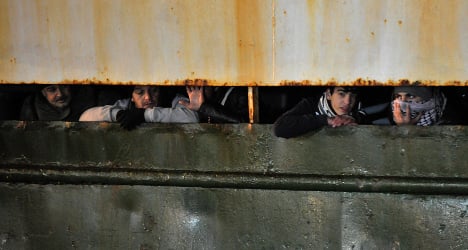 Syrian refugees on board the Ezadeen ship; the second abandoned cargo ship rescued by Italian authorities in as many days. Photo: Alfonso Di Vincenzo/AFP

Among the 768 were Mustafa and Ragda. Not too long ago, they were part of the middle class in the Syrian economic capital of Aleppo. As the conflict raged, the northern city was transformed into a battlefield and they were forced to leave their land as refugees.

As they ran out of options, the couple put their lives in the hands of people smugglers offering them the prospect of getting to Europe.

They set off last month on a perilous voyage across the Mediterranean with their three daughters aged 18, 20 and 30 on the ageing and rusty Moldovan-flagged Blue Sky M cargo ship from Turkey.

"We each paid €6,000 in Turkey, where we were living for two months. Some people sold their land, homes or shops to be able to make this journey," Mustafa told AFP.

"We survived a number of storms, it was raining so hard. Water was running from the boat and streaming of people's heads. The boat was going in every direction. As for food, people were sea sick and were vomiting all the time, no one could eat," added Ragda. One of their daughters also suffered from stress-related heart problems.

Their oldest daughter, seven months pregnant, was trying to join her husband who had made the same voyage three weeks earlier.

Images captured by the 30-year-old woman show people packed in like cattle, huddling under blankets on the cold bare floor. Men, women and children lay head to toe in the limited space in the rusting ship's hull while others sat on the ledges around the edges.

After leaving the Turkish port of Mersin, the ship's "crew" abandoned the migrants at sea – with the vessel locked on autopilot heading on a collision course towards the Italian coast.

Accounts from people like Mustafa and Ragda not only reveal the miserable conditions for those on board, but their story also highlights another disturbing trend.

The Blue Sky M drama was one of two cases over the past week where cargo ships were deliberately abandoned in dangerous conditions by traffickers in the Mediterranean Sea.

Two days after the Blue Sky M was brought ashore, a second abandoned cargo ship was rescued by Italian authorities with 450 migrants on board.

The incidents have raised fears that smugglers could use the same tactics in future as they seek to take advantage of a greater number of people fleeing conflict and poverty in Africa and the Middle East.

The United Nations has described the Mediterranean Sea as the deadliest route in the world, with more than 3,400 migrants perishing in 2014, out of more than 207,000 who attempted the dangerous crossing.

According to the Italian interior ministry, the country rescued more than 170,000 people last year, or an average of 465 a day.

Like many other migrants Mustafa and Ragda hope to continue on to more receptive countries like Germany or Sweden where the prospect of work is better as well.

But having arrived in Italy they are prohibited from seeking asylum in any other EU country.

Angry at the Italian authorities for having been "treated like prisoners", Mustafa and Ragda have not given up their hopes of heading further north.

As they wait they are being taken care of at the Farsiprossimo Onlus centre close to Milan where they have been given clothes, meals, beds and the time to recover from an exhausting journey.

Majed, a 21-year-old computer engineering student who was also on the same ship, remained pragmatic after the epic voyage.

"We call it the 'voyage of death'. But if we want to be happy, we have to go to Europe. On the boat there were many babies and children and women. But still we said that we were there to build a better future for ourselves and our children."