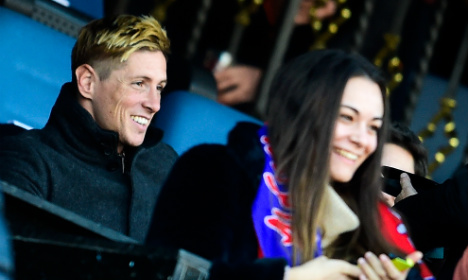 With Fernando Torres watching on from the stands before his move back to his boyhood club is concluded on Monday, Griezmann was under pressure to continue his fine form after scoring a hat-trick as Atletico closed 2014 with a 4-1 win away to Athletic Bilbao two weeks ago.

And he duly obliged with two headed finishes from close range early in each half before Diego Godin nodded in Atletico's third after Nabil El Zhar's deflected effort had given Levante hope.

Atletico are now level with Barcelona in second place and one point behind leaders Real Madrid, with the latter two sides in action against Real Sociedad and Valencia respectively on Sunday.

Torres was the star attraction before kick-off as he took his seat in the directors' box to much acclaim.

However, on the field, Griezmann ensured Los Rojiblancos' former captain will find it hard to get into the side for the visit of Real Madrid in the Copa del Rey on Wednesday.

Atletico coach Diego Simeone, though, suggested Griezmann could eventually move out wide, where he has played for the majority of his career, to make way for Torres.

"More than just the goals, which are important for him and the team, I like when he tracks back, works and when he wins the ball back to be able to attack from better positions," Simeone said of Griezmann.

"He can play in different positions, as well as on the wing where he has played before. Not all games are equal and there could be times when all the forwards play."

Griezmann put Simeone's men in front on 18 minutes when Guilherme Siqueira's cross from the left looped into the Frenchman's path and he nodded past the helpless Diego Marino.

Atletico looked to have made the game safe just 60 seconds into the second period as, despite more heroics from Marino to claw a Mandzukic header off the line, he couldn't react in time to prevent Griezmann's follow-up effort crossing the line.

However, the hosts were pegged back just after the hour mark when Levante halved the deficit.

Mandzukic was again heavily involved as he did brilliantly to turn Victor Casadesus's header off his own line, but the ball fell to Ivan Lopez and his drive clipped El Zhar on its way into the far corner.

Simeone then withdrew Turan and Mandzukic with one eye to Wednesday's repeat of last seasons' Champions League final against Real.

And, not for the first time this season, the Argentine's side needed to rely on their threat from set-pieces to seal the three points eight minutes from time when Godin headed home Tiago's in-swinging cross.

Elsewhere, Sevilla moved above Valencia into fourth, but were far from convincing in a 1-0 win over 10-man Celta Vigo.

The visitors were forced to play 70 minutes with a man less after Carles Planas was shown a straight red card for chopping down Denis Suarez.

Nico Pareja then scored the only goal of the game from a free-kick 12 minutes later to continue Sevilla's unbeaten record at home this season.

Villarreal lost ground in the fight for the Champions League places as they let a two goal lead slip away to bottom side Elche to end a seven-game winning streak in a 2-2 draw.

Malaga are now three points off the top four after a controversial Tomer Hemed late penalty handed Almeria a 2-1 win at La Rosaleda, whilst Deportivo la Coruna moved out of the relegation zone thanks to a 1-0 victory over Athletic Bilbao.

As soon as the full-time whistle blew in Valladolid to confirm a 2-1 win, Atleti supporters flocked to the Neptune fountain in the centre of Madrid, in
line with tradition but defying Covid-19 rules regarding the wearing of masks and social distancing.

“I was confident Atletico would win. It was like a final and being against Valladolid, I knew we were going to win,” Federico Gonzalez, 46, and among the crowds, told AFP.

A large police presence surrounded the fountain, with several vans also present to prevent people from approaching the fountain, which had been lit up in Atletico’s red and white colours.

Fans waved flags and scarves while others set off flares as darkness fell, the celebrations going on into the night after Atletico’s second La Liga title in seven years.

“It is a joy. From the beginning of the game I was overcome with nerves because Atleti plays each game in its own way and you just never know”, said Carlota Maestro, 20, who came to the city centre with three friends.

Amid shouts of “Atleti, Atleti” and “Campeones”, the rojiblancos fans danced, jumped and hugged each other. Cars and motorbikes drove by honking
their horns, some with red and white flags poking out of the windows.

The Covid-19 pandemic has meant Atletico’s fans have not been allowed to attend matches this season and their celebrations defied the recommendations of the authorities.

Fans ignored rules on social distancing and many were not wearing masks. “Please, I ask the Atletico fans not to go to Neptune,” wrote the mayor of
Madrid, Jose Luis Martinez-Almeida, himself an Atletico supporter, on Twitter. “I am the first to understand the desire to celebrate but this is not the time.”

“It is a strange celebration, because we have not been able to do it like normal, on the field, surrounded by other fans,” said Pablo Diaz, a 22-year-old fan. “We celebrate it but with a little fear, being careful, and wearing a mask.”

Hundreds of other fans had accompanied the team to Valladolid, where they watched the game on their phones in the car park outside the stadium.

After the match, Atletico’s ran out of the stadium to celebrate with the supporters they had not seen all season.