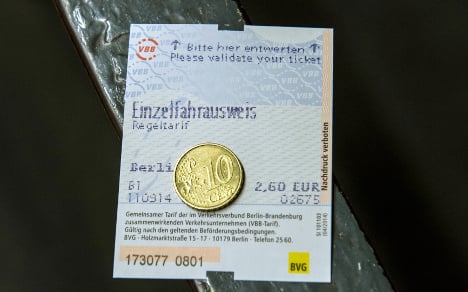 Passengers will have to pay between two to four percent more, as city transport operators point to the  rising costs of infrastructure, implementing  renewable energy reforms, and the rising salaries of public transport personnel as the causes.

In Berlin, fares went up on January 1 by 2.3%, in Munich by 3.6%, in Cologne by 2.8% and Hamburg by 2.6%. The Rhine region, which includes Frankfurt am Main, Wiesbaden, Mainz und Darmstadt have seen a 3.45% price hike,  increase in train and bus ticket prices, while passengers in the Ruhr region, which includes cities such as Dortmund and Duisburg, have to pay an average of 3.6% more.

Both Frankfurt and Berlin have pointed to energy costs and rising salaries as reasons for the fare increase. Frankfurt public transport operator RMV said last year that increases in passenger numbers and more efficient trains could not balance out the costs of complying with renewable energy legislation.

“Price hikes are naturaly annoying,“ said RMV spokesperson Knut Ringat. “But we cannot absorb the rising costs while keeping the services the same“.

While Berlin public transport operator VBB  decided in October to raise prices by an average of 2.3%, prices for some special tickets will remain constant even after January 1, such as the Berlin-Ticket S for the unemployed, those on welfare, or asylum seekers, which currently costs 36 euros.

Tickets already purchsed before the new prices came into affect can be used until 14 Jan, after which passengers have to exchange them for new tickets and pay the price difference, or get their money back until May 31.

Officals of the VBB said that this is the first price increase since the summer of 2013, when ticket fares rose 2.8% in average.  VBB said it expected additional revenue of 22 million euros as a result of the hike.

Before the price hike took effect, Berlin's public transport passengers interest group IGEB criticised the increase in a statement saying the tickets were already expensive in 2014.

“The VBB and the transport companies have justify their price hikes for years by saying that the fares are comparable with those in Hamburg, Frankfurt or Munich. But they omit that purchasing power is much higher in these regions in the old federal states (West Germany).”

Dodging fares has also become more expensive in 2015, with the fine costing €60 instead of previous year's €40, bringing the fine to a similar level to the UK, but still much lower than many other countries in Western Europe including Belgium (up to €200), France (up to €180) and Switzerland (up to €160).