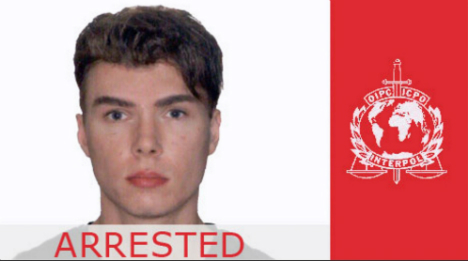 Luka Magnotta filmed himself killing and dismembering Jun Lin in Montreal in 2012. As well as possibly eating body parts, he sent some of the dismembered limbs to political parties in Canada, before fleeing first to France and then Germany.

He was caught by police in an internet café in the Neukölln district, after the owner recognised Magnotta, 32, reading articles about his crime online.

Magnotta had pleaded guilty to the crime but his lawyers had argued that he was suffering from schizophrenia, and thus had diminished responsibility for his actions.

However, on December 23 a court in Montreal found him guilty of the murder of Lin, a Chinese engineering student, and further counts of committing an indignity on a human body, publish and mailing obscene material, and criminally harassing Canadian prime minister Stephen Harper and other politicians to whom he sent body parts.

Magnotta is now beginning a life sentence with at least 25 years without the possibility of parole.

Later that week a foot of the victim arrived at the national headquarters of the Canadian Conservative party, with another body part arriving at the Liberal Party HQ. He was captured in an internet café in the trendy but scruffy Neukölln district on June 4, 2012.

Jurors in the court in Quebec found him guilty after eight days deliberation on December 23, 2014.

Lin’s father was in court to hear the verdict. Magnotta refused to testify during the trial.