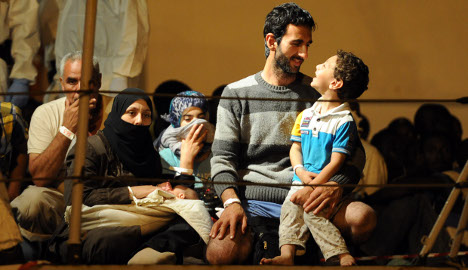 According to a report in La Repubblica, around 15,000 immigrants have been welcomed by convents, parishes and charities since the Pope urged them to take action in October last year.

“The commitment of the Italian church in favour of asylum seekers and refugees has intensified in recent years.”

In October 2013 more than 350 immigrants travelling from Libya perished when their boat sank off the coast of Lampedusa, near Sicily, and the number of arrivals has increased in 2014.

Moved by the fatal tragedy, the Pope appealed to Catholic institutions and charities to do more to aid immigrants and asylum seekers.

The centre has been assisting refugees who have fled wars, violence and torture for over 30 years and responded to the Pope’s plea. The centre feeds around 400 migrants a day at its centre in Rome.

“The number of refugees being welcomed in convents and religious institutions is significant,” said Father Camillo Ripamonti, president of the Centro Astalli. “It is about finding the right way in which you can open your doors.”

In the heart of Rome, nuns from the Sisters of Charity from Saint Joan Antide Thouret voted on whether they could host refugees. The 65 nuns voted unanimously to take up the Pope’s offer.

“Opening your doors requires courage. The Pope’s invitation touched the hearts of many, especially in his city,” said Ripamonti.

Italy witnessed an unprecedented wave of refugee arrivals in 2014 – more than 150,000 immigrants made the perilous sea voyage.