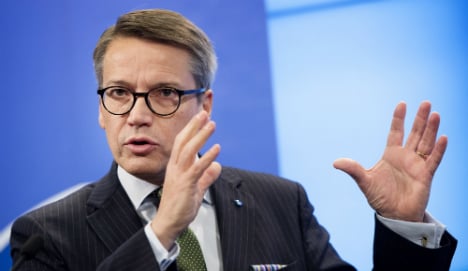 "I am tired of the fact that all discussions start and end with the Sweden Democrats," party leader Göran Hägglund said on Thursday.

The party's proposals include a reduction in benefits offered to refugees and the introduction of temporary residence permits to replace the current praxis of permanent residency.

"This is an area where we haven't achieved sufficient success," Hägglund said referring to higher levels of unemployment among newly-arrived immigrants in comparison to people born in Sweden.

Hägglund explained that the party, which has been languishing in the polls since the September election, would like to see the changes in order to "preserve the legitimacy" of Sweden's asylum policy.

Among the measures is included a proposal that new immigrants be able to earn up to 100,000 kronor ($13,000) tax free per annum for their first five years in Sweden. At the same time the party proposed a reduction in introduction benefits to finance the initiative.

While Hägglund underlined that the proposals were not a question of "closing the border", the move was welcomed by the Sweden Democrats (SD), who have proposed a dramatic reduction in immigration to Sweden.

"This paves the way for a more informed debate about immigration," acting party leader Mattias Karlsson said on Thursday. Karlsson added that the proposal could make it easier for SD to side with the Alliance if they were to win the upcoming extra election.

The Christian Democrats, which form part of the four-party Alliance opposition, are reported to have acted alone in the matter while the Moderates and the Liberal Party have welcomed the discussion.

"If we want an open Sweden in touch with the Zeitgeist and part of a globalized world then we should not be regarding refugees in terms of a cost," Green Party spokeswoman Åsa Romson said.

Romson expressed a hope that the other Alliance parties do not follow the Christian Democrats' lead.

Experts however expressed little surprise at the tactic.

"The question was not really if it was going to come, but when," said Ann-Cathrine Jungar, a political scientist at Södertörn University College.

Jungar drew parallels with processes occurring in other European countries which have also experienced emerging nationalist and populist parties.

"This is of course a deliberate tactic, to prevent more votes heading to the Sweden Democrats and to reclaim some voters who have already moved. The discussion about immigration has become very black and white as parties who wish to discuss the matter risk being accused of playing into the hands of the Sweden Democrats," she said.

Jungar explained that it was difficult to predict how the Christian Democrats move would affect the political landscape in Sweden, if at all.

"In Belgium the other parties adapted but still managed to maintain a distance from Vlaams Belang, which became isolated," she said.

Sweden's Prime Minister Stefan Löfven has said that the government intends to decide that an extra election is to be held on March 22nd 2015 in a bid to address the parliamentary stalemate.