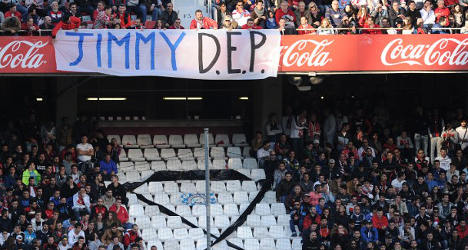 Junior security minister Francisco Martínez announced the move on Tuesday to a parliamentary commission investigating the brawl in which rioters rampaged with metal bars and knives hours before the two sides' November 30 match.

"I have decided to order the dismissal of both clubs' security coordinators as a measure of joint responsibility in the person's death and the violent acts in the streets of Madrid," Martinez said.

He said police were still investigating how members of Riazor Blues, a radical fan group linked to Deportivo, got hold of 110 tickets to the match without the authorities' knowledge.

The man who died after being beaten and pushed into the river in the fighting was identified as a 43-year-old member of the Riazor Blues.

Martinez said his ministry would also propose new protocol to task police with monitoring verbal abuse in the football stands.

"All forms of physical and verbal violence must be eliminated from sport," he said.

Spain's Football Federation and the government-controlled Higher Sports Council have said tougher sanctions for clubs over violent behaviour by supporters will come into force on December 15th.