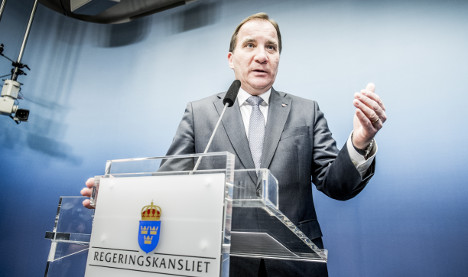 Speaking at a press conference on Wednesday afternoon, Social Democrat Prime Minister Stefan Löfven said that Swedes would be asked to vote again on March 22nd 2015. The last general election was in September 2014.

“The government will campaign to seek re-election together with Greens and on the basis of the budget that just got defeated,” he told reporters.

Löfven was pushing for increased spending on welfare and jobs and pledged to maintain Sweden’s liberal immigration laws.

But his budget failed to get enough support because the nationalist Sweden Democrats – who hold the balance of power in parliament – chose to support a rival budget from Sweden’s centre-right opposition parties.

The government’s budget got 153 votes, whereas 182 politicians were in favour of the opposition’s budget, triggering a political crisis in the country.

Analysis: A new government by the Spring?

Prime Minister Stefan Löfven had previously attempted to negotiate with the four centre-right parties of the Alliance, that made up the previous government. But the talks broke up on Tuesday without a result.

Stefan Löfven said that he would resign rather than implement the opposition’s budget if it got voted through instead of his own.

Swedish politics is 100% game theory right now. Nobody quite sure where we’re heading. Old rules no longer apply. #svpol

Following Wednesday’s election announcement, the co-spokesperson for Sweden’s Green Party, Gustav Fridolin, backed up the Prime Minister’s comments that there would be a joint campaign from the two parties in 2015. He argued that that the current Social Democrat-Green coalition had “a basis to get a majority” in the upcoming poll.

Who’s who in Swedish politics?

There has not been an unplanned election in Sweden since 1958.

Stefan Löfven’s coalition government won 37.9 percent of the vote in the last general election on September 14th 2014, making it the largest political bloc in parliament.

Its acting leader Mattias Karlsson told The Local on Wednesday that the party had used its ‘kingmaker’ role in reaction to the government’s pro-immigration policies.

“Sweden has most extreme immigration policy in Europe and the government wanted to make it more extreme,” he said.

“We said we were willing to compromise concerning a lot of other issues and we wanted to have talks with the Prime Minister. The Prime Minister refused this. He refused our demands and therefore this is the situation that occurred and I think the responsibility for that is solely the Prime Minister’s,” he added.

How the Sweden Democrats went mainstream

The number of refugee arrivals alone is estimated to reach close to 100,000 in 2015, partly due to Sweden’s decision to grant residency to all Syrian asylum seekers.

The country has the highest rate of asylum applications per capita of any EU nation. But none of the mainstream political parties in Sweden are in favour of capping immigration.

Speaking to Swedish television network SVT, Karlsson said that he wanted the upcoming vote to be “a referendum on immigration”.

It is currently unclear whether Karlsson will lead the Sweden Democrats during their campaign. He is covering for the party’s leader Jimmie Åkesson who is on sick leave.

Many political analysts in Sweden are shocked at the Prime Minister’s decision to call an election so suddenly, rather than attempting to compromise further with other parties.

“I think most people are extremely surprised. I felt that a new election would not be a priority for the government and that it was something that all the parties would have wanted to avoid,” said political scientist Nicholas Aylott from Södertörn University in Stockholm.
“We can now expect another long election campaign that will be expensive for all the political parties. It is unheard of to have an unplanned election in Sweden. The last time was in the 1950s under a previous constitution,” he told The Local.
“Some of the political campaign posters from the last election still haven’t even been taken down here in Stockholm, but it looks like we’ll be getting new ones”.