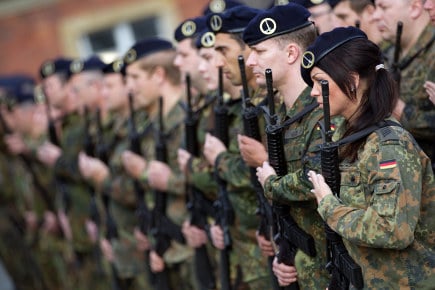 Soldiers of the German/Netherlands Corps will form much of the new Nato force. Photo: DPA

"Ukraine has conducted itself honoroubly in holding up the [Minsk] Protocol, Russia and the separatists haven't done so", Nato Secretary-General Jens Stoltenberg said.

"We call on Russia to fulfil its obligations."

The Minsk agreement, signed in early September, called for a ceasefire and the establishment of a buffer zone between Ukrainian government forces and pro-Russian separatists.

But fighting has continued in the conflict zone, with evidence pointing to Russia delivering tanks and heavy weapons to separatist fighters and breaking international law.

Nato has also criticised Russia's plans for increasing its military presence in the Black Sea, saying that it could further destabilise the region.

"We strongly condemn Russia's continuing and wilful destabilization of eastern Ukraine", the Nato foreign ministers said in a joint statement with the Ukrainian government.

'Spearhead' to deploy to crisis zones

Responding to Russian actions in Ukraine this year, the 28-member Nato alliance agreed at a September summit in Wales to create a 'spearhead' to the existing Nato Reaponse Force (NRF).

Capable of deploying in 2-5 days to crisis zones, especially at Nato's periphery, the 'Very High Readiness Joint Task Force' (VJTF) may now take shape next year rather than in 2016.

The exact size and composition of the force – and who will pay for it – are still under discussion and are expected to be announced at a meeting of Nato defence ministers in Munich in February.

Poland and the three Nato members of the former Soviet Baltic republics are especially fearful of Russian military incursions as the conflict deepens in Ukraine.

The decision to form the VJTF was a "clear sign to our allies in the East and a clear sign to Russia," a Nato official told Die Welt newspaper earlier.
Ukraine to join Nato?
Meanwhile, Stoltenberg said on Monday that the alliance would increase its support for Ukraine and that the former Soviet republic's long-sought membership of Nato was not ruled out.

Russia responded to the statement by announcing new naval exercises.

Defence officials in Berlin have said Germany will provide around 4,000 troops for the new force, drawn mainly from the Münster-based German/Netherlands Corps.

The alliance currently maintains an immediate response force of 13,000 high-readiness troops. As scheduled, Germany will in 2015 assume the rotating command of this force. It will also take a lead role in the formation of the VJTF.

Nato has indicated that the spearhead will be a multi-service as well as multi-national formation. It will comprise a land component with air, maritime and Special Operations Forces available.

As for the geographical extent of its potential deployment, this will depend on specific threats towards Nato members and how the alliance as a whole responds to them.

Asked whether Nato would take part in a land operation in Syria, for example, Stoltenberg said in Warsaw last month that Nato remained fully committed to defending the territorial integrity of all allies, including Turkey, which directly borders on the Syrian conflict region.

“There will be possibilities to deploy land forces if we see any actions or developments that put security at risk,” Stoltenberg said.