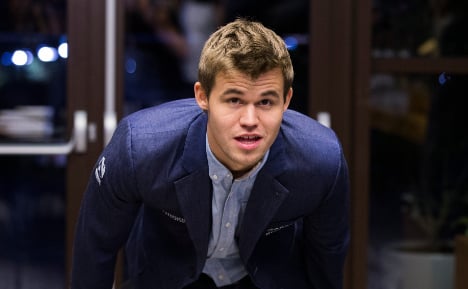 The 23-year-old Grandmaster retained his title, beating India's Viswanathan Anand 6.5 points to 4.5, after a gruelling two weeks of competitive chess.

Following the decisive weekend match, Carlsen toasted his victory with cake and poker in Sochi. The world number one was feeling a little ill and had a well-earned lie-in on Monday. The Norwegian did find the time and energy to do a yoga session later in the day to wind-down after the strain of the past weeks at the chess board.

Carlsen stated that this year's victory felt even better than last year's and he complemented Vishy Anand for putting up a tough fight during their battle in Sochi.
The champion also took time up to update his Facebook page, writing "two down, five to go”. This is in reference to Russian chess legend Garry Kasparov's six World Championship victories. Carlsen clearly has set his sights on beating that record.
Kasparov praised Carlsen after the Norwegian’s latest triumph and described the Norwegian as a unique talent.
"[Carlsen] is a combination of Bobby Fischer and Anatoly Karpov. He has Karpov's precision and feeling for the best positions, and Fischer’s resolve,” said Kasparov.
Fischer was the World Champion from 1972 to 1975, before Karpov won the title and held it for 10 years.