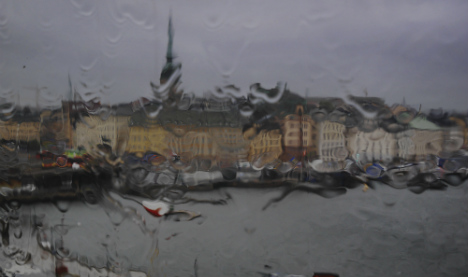 Stockholm's Old Town in the rain. Photo: TT
Brian Alan Farrell, from Culleens in county Sligo, had been working as a carpenter in the Swedish capital since March, according to media reports. Farrell has been the subject of an extensive search since he was last seen in the Gamla Stan area of the city of November 10th.
The 32-year-old's body will now undergo a post mortem examination, according to a report in the Irish Times.
The search for the Irishman included members of his family who had travelled to the Swedish capital in search of answers.
The family issued a statement on Friday thanking the Stockholm authorities for their help and to all those who had "supported them at this difficult time".
Once the formalities are completed in Stockholm the Farrell family plan to bring the dead man home to Ireland for burial.